Art of the Hunt

By: Jane Weinke, curator of collections/registrar on June 3rd, 2020

It’s not a secret; I love working at the Woodson Art Museum. What’s not to love? Each day I’m with fabulous colleagues, in a beautiful facility, surrounded by stunning artworks. Working with the Museum’s collection of thousands of historic and contemporary paintings, works on paper, and sculpture throughout forty years, I’ve curated more than 100 exhibitions.

Where do I get the themes and how do I choose the artworks? That’s the challenge and joy. Rather than a recipe, it’s more like a jig-saw puzzle. The exhibition idea “picture” is there; getting the pieces in the right place is the goal.

Art of the Hunt is my recent endeavor. Hunting is deeply rooted in human culture. Many members of my family hunt, and I’ve eaten various types of game throughout the years. I’ve shot firearms, aiming only at imposing clay pigeons. I’ve been hunting with my husband and seen the skill required to take down a bird.

The works on view in Art of the Hunt illustrate the changing role of birds and animals through images of hanging game and sportsmen in the field and the birds they pursued. The oil paintings, etchings, and lithographs along with intricately carved decoys and bronze sculptures, date from the early-nineteenth century and into the twenty-first. Each artwork shares a story of a hunter’s experience, the sensations of the surroundings, including the beauty of a fall day, the struggle against harsh winds and sub-zero temperatures, a leisurely seasonal walk with man’s best friend alongside, and the beauty of hundreds of birds taking flight.

As much as I’d love to take each of you on a walking tour of the exhibition, for now, the Museum remains closed amid the Covid-19 pandemic as we finalize our re-opening plans. Instead, I’ll pique your interest by highlighting three artworks, share a few images of the installation, and hope to present a gallery walk someday soon.

“The warm glow of an evening sky, a recently harvested cornfield, and an ice-skimmed pond: this familiar, late fall Wisconsin scene provides the backdrop for a flock of Canada geese stopping for the night,” wrote the artist.
The Horicon Marsh in southeastern Wisconsin attracts some 200,000 migrating birds annually to its freshwater marshland. Not far from Gromme’s Briggsville home, he spent many hours at Horicon observing geese and other migrating birds. 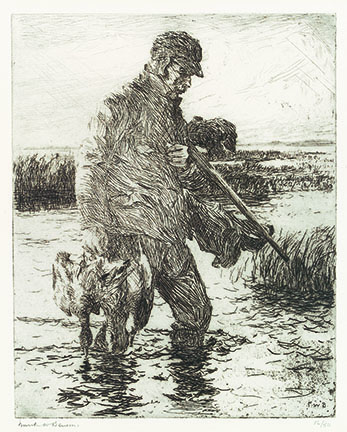 Benson’s experimentation with etching and drypoint began at age fifty, following many years as a successful portraitist and impressionist painter. His dedication to sporting prints was so focused and generated such increased popularity for the genre, that it became a distinct art form and Benson was referred to as the “Master of the American Sporting Print.” His oeuvre contained more than 300 plates, the majority emphasizing wildfowl, including an etching of three canvasbacks, featured as the 1935-36 Federal Duck Stamp design.

The Gunner is a self-portrait. An ardent hunter, Benson knew firsthand the revitalized spirit realized from a carefree afternoon in the marsh. He used his flawless drafting skills along with a classical composition to portray himself as a sportsman at the end of a successful hunt. The evident fatigue from a tiring walk through icy waters and the persistent push against bone-chilling winds encapsulates the hunting experience. 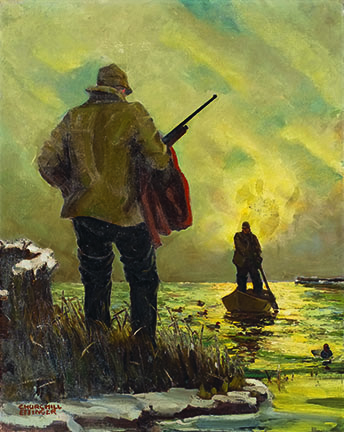 Winter Hunt evokes many emotions and sensations; you can almost feel the cold, damp air. Perhaps the water lapping the shore, the cutting of the oars through the water, the distant calls of waterfowl, or even the echoing sounds of gunshots from neighboring sportsmen pique your senses, interest, and love for Art of the Hunt. 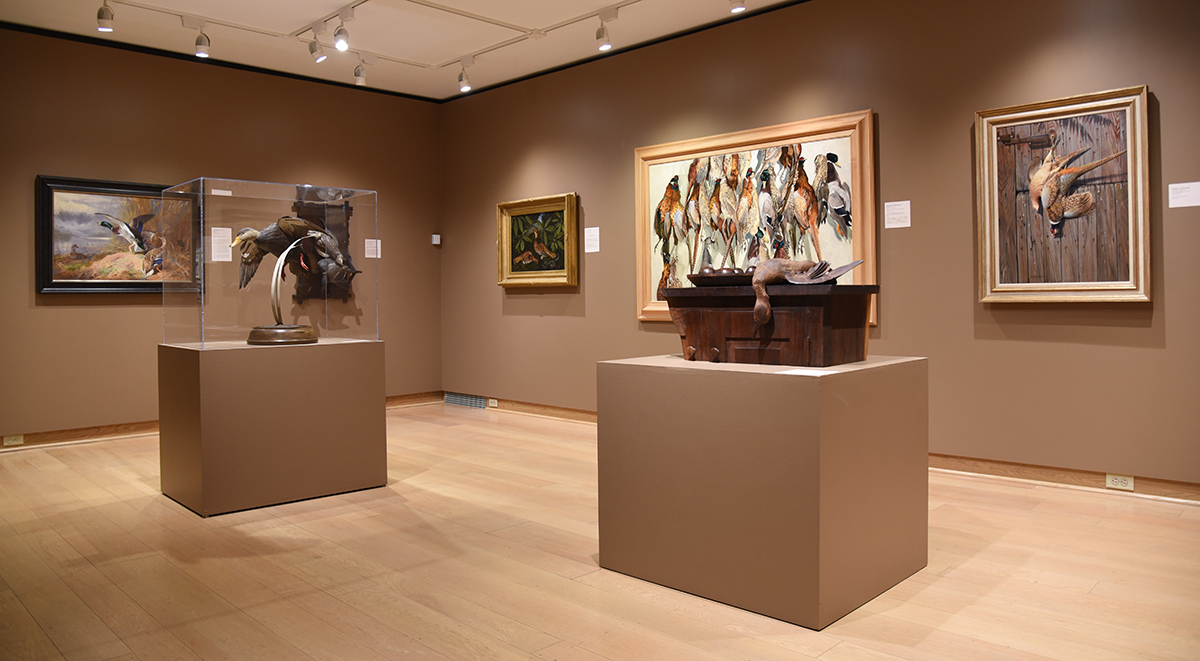 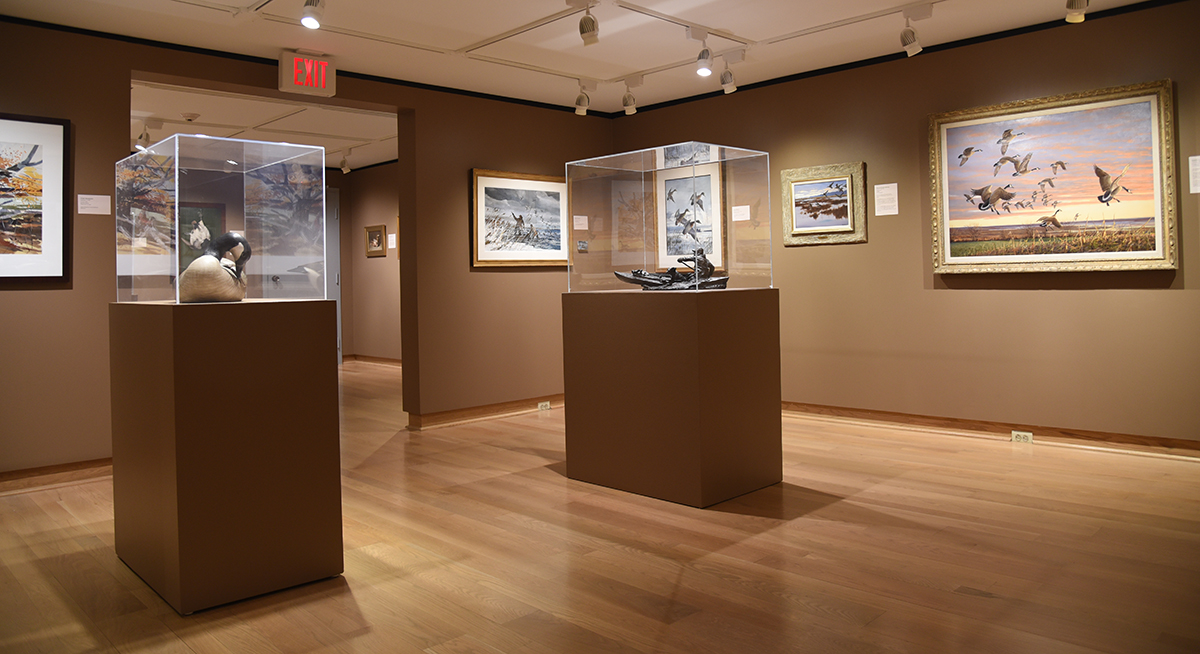