By: Jane Weinke, curator of collections/registrar on February 1st, 2017

In past blog posts I’ve shared stories about various artworks and how they come into the Leigh Yawkey Woodson Art Museum’s collection where the narrative continues. The Museum’s collection also includes a treasure trove of additional materials including artists’ preliminary sketches and correspondence.

The Woodson Art Museum is entrusted with the archives of two artists: Don Richard Eckelberry and Owen J. Gromme. The stories revealed in the files are fascinating. Not only is it intriguing to read words on paper, it’s interesting to examine the ways that types of paper and duplicating processes have evolved. Early copies were made using carbon paper and onion skin paper. Mimeograph copies were made using blue ink and a stencil placed on a machine. Early faxes were printed on thermal paper, and photocopying is the current method. All were familiar to me, yet I was surprised by which ones stood the test of time – the onion skin and carbon paper copies are surprisingly fresh. Saving the words as the paper and ink ages is an ongoing preservation challenge.

Recently, I was asked to develop an exhibition to complement the U.S. Fish and Wildlife Service’s 2017 Duck Stamp Competition that will be held at the College of Natural Resources at the University of Wisconsin-Stevens Point September 15-16. This marks the first time the historic event will be held in Wisconsin. 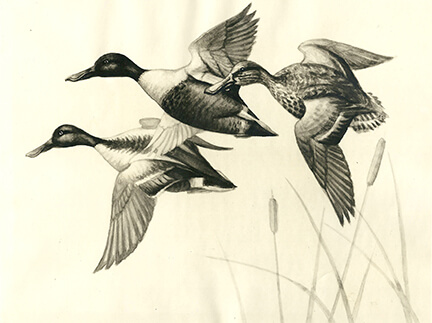 Federal Duck Stamp, I went to the Museum’s archives for further information. Not only did I find correspondence directly related to the competition, letters of congratulation, and requests to sign copies of the stamp, but also four pencil sketches. Two of the drawings related to Three Shovellers; Gromme likely entered or considered two other designs: one depicting buffleheads and another of black ducks. 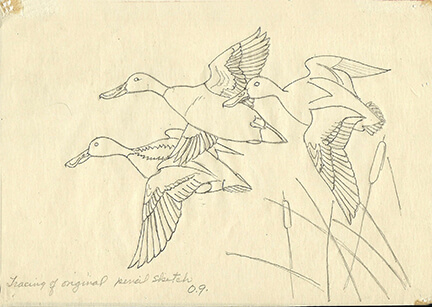 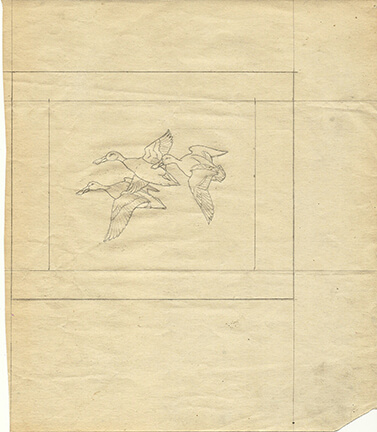 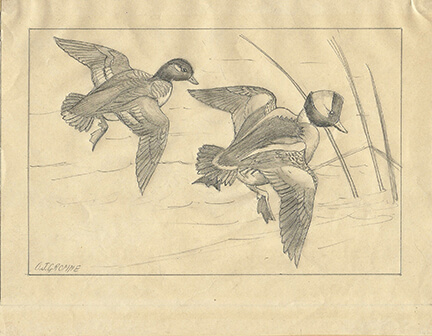 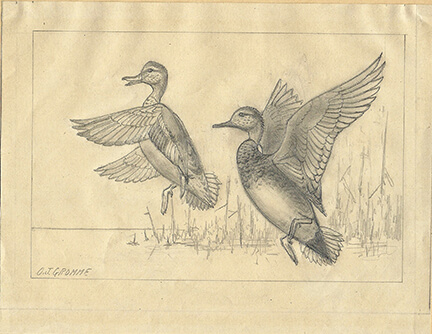 Thanks to a document scanner, I’m able to digitize all of the papers in the file – a 21st century preservation technique. Included are Gromme’s letter with 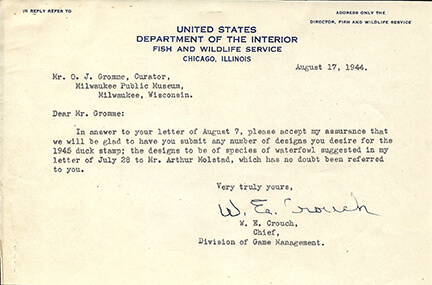 questions about submitting an artwork, the formal letter that acknowledges Three Shovellers as the 1945-1946 Migratory Bird Hunting Stamp (now the Federal Duck Stamp), photo of the first day stamp issue, the four pencils drawings, and more.

The Woodson Art Museum and the Federal Duck Stamp Competition both 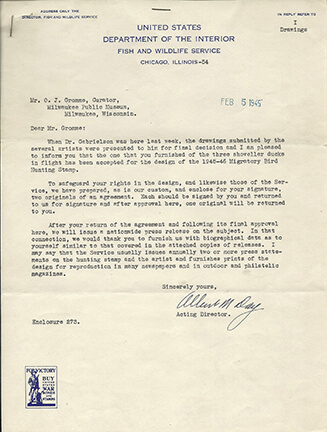 champion birds. The proceeds from the sale of Duck Stamps are used to acquire land to ensure habitat conservation. At the Museum, we collect, preserve, exhibit, and interpret artworks focused on avian subjects. 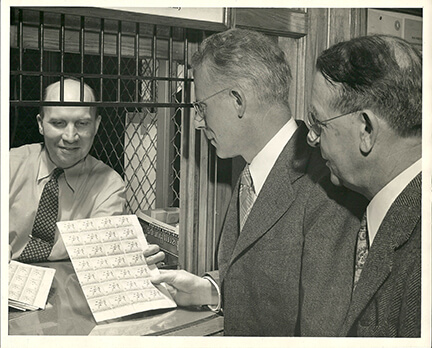