Viewing the summer exhibition, Many Visions, Many Versions: Art from Indigenous Communities of India, I hark back several decades to undergraduate religious studies courses. Though once well-versed in tenets, truths, sacred texts, and iconography, I now only retain oversimplifications of Western and Eastern philosophy and world religions. Dinner conversation with my young adult children is all the proof I need that nimble, nuanced, discourse will atrophy if not exercised. Their arguments are elegant and substantial; mine have morphed into easy-breezy recollections.

An Eastern concept I recall is “impermanence” – the worlds of time, space, and form are conditional, in flux, and transient. Events, phenomenon, actions, words, and beings are fleeting. Accordingly, Eastern philosophy is more circular and cyclical than linear.

As people worldwide cautiously emerge for “re-openings” following quarantines, pondering “impermanence” can be comforting. I am a linear thinker. I like ticking boxes on to-do lists, and planning is one of my coping strategies. Eastern art traditions – and pandemics – remind me that other worldviews may also inform and assuage my daily existence.

Art of India’s indigenous cultures frequently portrays non-linear folktales. Read a gallery label for the story; then pause and lose yourself in the painting, looking for markers or symbols of the tale. Or be less direct in approach and simply “be” with the painting.

As described in an artwork label: 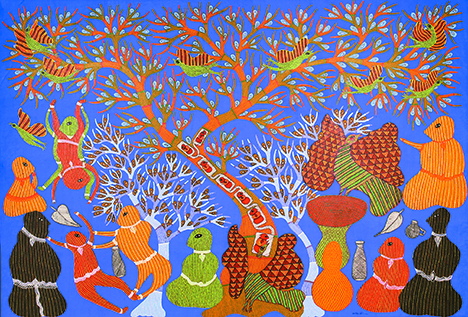 Ram Singh Urveti incorporates Hindu deities in a painting depicting a Gond tale about two craftsmen – a woodpecker and an ironsmith – who quarrel after getting drunk on mahua (a home-brewed liquor named after the eponymous flower from which mahua is prepared, often used as a libation). The woodpecker boasts of the craftiness with which he captured yamadoots, messengers sent by Yamadeva (the god of death) to take him away, thus eluding his predestined death. He claims that he captured in a tree the seven doots Yama sent consecutively. Meanwhile, Shiva and his consort Parvati descend incognito onto earth to ascertain why none of the messengers returned. When they overhear the woodpecker’s boast, they punish him and free the yamadoots. 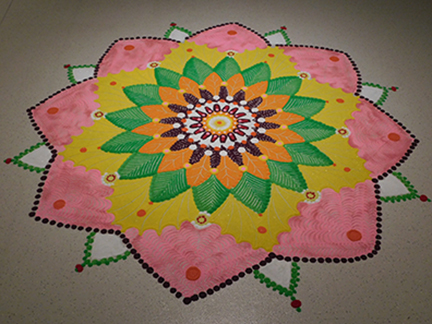 While decorative, many rangolis are inspired by Hindu beliefs. An often daily ritual and artmaking process celebrating impermanence, rangolis are intended to be consumed by creatures or swept or blown away. Rice flour invites ants to the doorway, demonstrating harmonious co-existence. Symmetrical patterns represent balance.

“This too shall pass” may be a helpful mantra. Seize opportunities to visit the Woodson Art Museum this summer. Find what comforts you and helps you cope – art, philosophy, religion, folktales, and dinner conversation.