Living for the Minute

By: Jane Weinke, curator of collections/registrar on May 11th, 2016 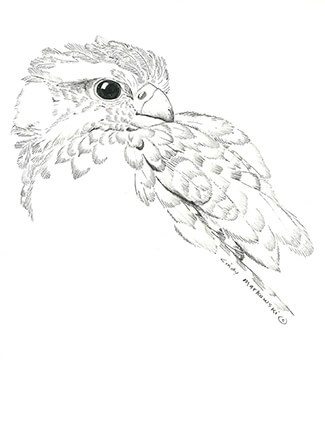 My home is in a beautiful part of Wausau, Wisconsin. It’s a mere 100 steps to a walking path that winds around Lake Wausau and the Wisconsin River. Not only is the scenery beautiful, but the bird songs also add a “pleasant” soundtrack.

I can relate to an artist’s need to sketch and work en plein air. Capturing the moments when light, landscape, and fauna come together is priceless. Even during nightly evening walks, I can’t help but get caught up in my surroundings and the desire to preserve the sensations.

In 1990, to celebrate the Woodson Art Museum’s fifteenth anniversary, artists contributed several hundred drawings and sketches in many mediums and dozens of species, in varying degrees of completion. That impetus and subsequent contributions have grown the collection to 14,000 works including drawings of rarely seen birds, sketchbooks, publication illustrations, doodles, and more. This collection would not be possible without the ongoing support of Birds in Art artists.

Making Marks includes eighty-nine works featuring captured moments. Each was created for a different purpose. Some were intended to inspire; others record detailed observations to preserve memories. Several are intricate; others comprise simple lines. Just as each sheet varies, so do the artists’ styles and  mediums.

I want to acknowledge the artists who generously donated their drawings and sketches to the Woodson Art Museum. Here is a list of artists included in Making Marks.

Enjoy these images of selected works from the exhibition on display through February 19, 2017.