The Leigh Yawkey Woodson Art Museum is drawing up interest in an exhibition of work by Dutch artist M.C. Escher with help from a $20,000 Joint Effort Marketing (JEM) Grant from the Wisconsin Department of Tourism. The exhibition, “M.C. Escher: Reality and Illusion,” includes 120 woodcuts, lithographs and drawings created by the artist best known for his geometric patterns and architectural fantasies, such as upside-down stairways. The exhibition will be on view at the Woodson Art Museum, always admission free, from March 4 through May 28, 2017.

“This project clearly demonstrates that funding tourism marketing initiatives produces a sound return on investment for the local economy,” Governor Walker said. “Tourism is part of Wisconsin’s economic foundation and its continued growth is a priority for my administration because of the nearly 191,000 jobs it supports, the tax revenues it generates and the positive image it projects for the State.”

Building on the themes of Escher’s work, the exhibition bridges the worlds of art, math, science and engineering through engaging programming for visitors of all ages. The 12-week exhibition is expected to attract 10,000 local and non-local attendees, generating an estimated $245,700 in tourism-related spending in Wausau and surrounding areas. JEM Grant funds will support internet search and social media advertising, aimed at drawing visitors from throughout Wisconsin, Chicago and the Twin Cities. 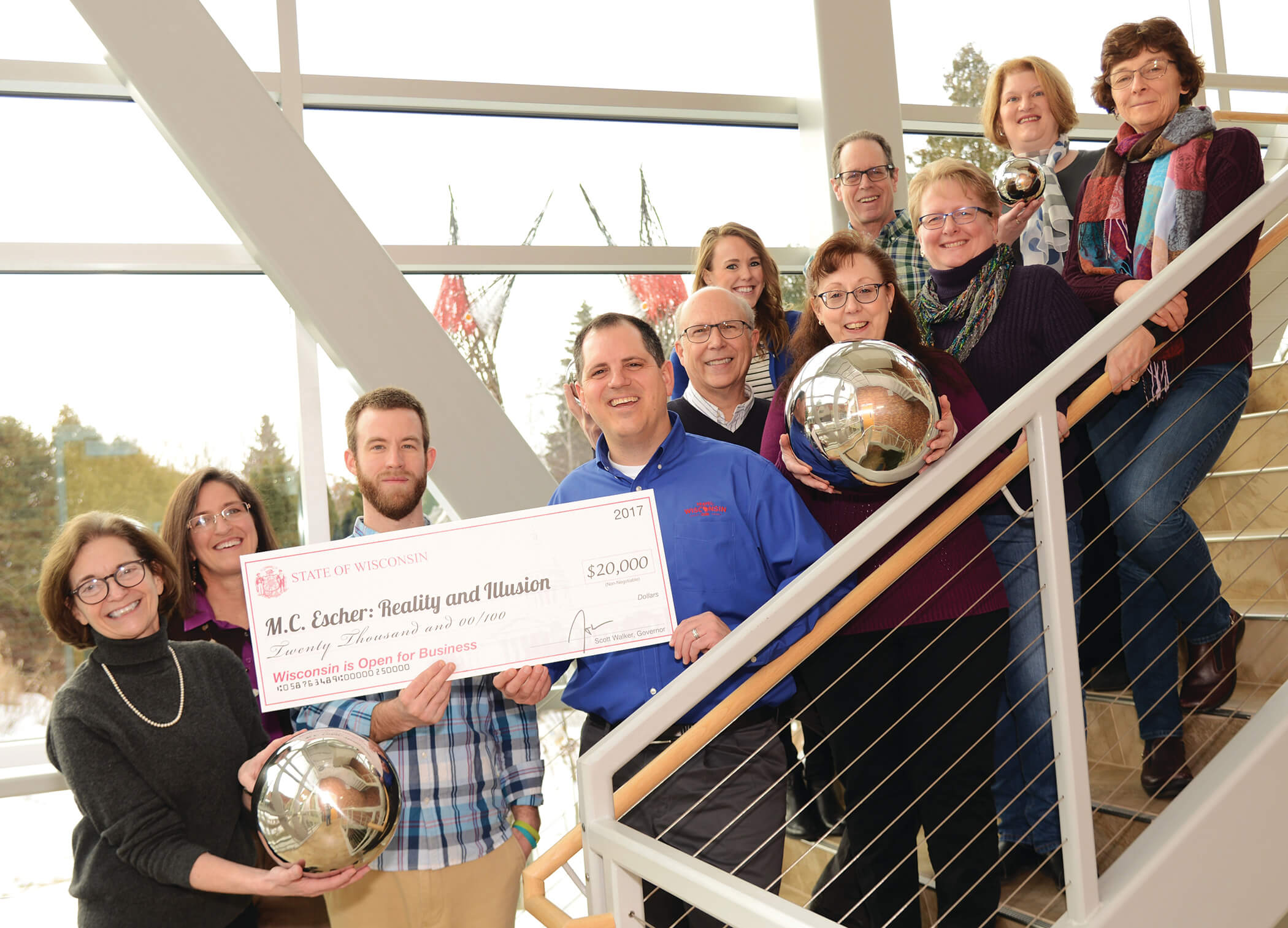 The Leigh Yawkey Woodson Art Museum in Wausau receives a $20,000 Joint Effort Marketing (JEM) Grant from the Wisconsin Department of Tourism for its upcoming exhibition by Dutch artist M.C. Escher. Regional Tourism Specialist Jeff Anderson, center, presents the check on Wednesday, February 15, 2017. Museum staff display gazing balls in reference to Escher’s fascination with these objects as he focused on reality and illusion in his artwork. Photo by Richard Wunsch

“We are excited to once again support the Leigh Yawkey Woodson Art Museum in its efforts to attract art enthusiasts and others to the Wausau area,” said Tourism Secretary Stephanie Klett. “Exhibitions with worldwide appeal like “M.C. Escher: Reality and Illusion” not only create a positive economic impact in the local community; they further establish Wisconsin as a growing arts destination in the Midwest.”

In 2015, the tourism economy in Wisconsin totaled $19.3 billion, a more than four percent increase from 2014. Since 2010, tourism activity in the state added 18,717 jobs to the economy, an 11% increase in travel and hospitality employment opportunities for Wisconsin residents. Visitors generated $1.5 billion in state and local revenue. Wisconsin taxpayers would need to pay $640 per household in order to maintain current government services. Total business sales in Marathon County reached more than $215.4 million in 2015, supporting 1,632 jobs and $15.5 million in state and local taxes.

“With the universal appeal of M.C. Escher’s iconic images, it’s significant to be able to spread information about the exhibition to an even greater number of potential visitors thanks to the JEM Grant,” said Leigh Yawkey Woodson Art Museum director Kathy Kelsey Foley. “The Museum is grateful to the Wisconsin Department of Tourism for its generous and enthusiastic support.”

In fiscal 2016, the Department funded 57 JEM projects, awarding a total of more than $1.1 million. Visitor expenditures driven by the marketing from these projects will exceed $31 million. JEM grant funds are available to non-profit organizations for the promotion of Wisconsin tourism events and destinations. The state can fund up to 75 percent of a project’s first-year advertising and marketing costs, and provide support for second- and third-year projects with decreasing amounts for funding until projects become self-sustaining. For information on the JEM Program and application materials, visit http://industry.travelwisconsin.com.

The mission of the Wisconsin Department of Tourism is to market the State as the Midwest’s premier travel destination for fun by executing industry-leading marketing programs and establishing strategic partnerships. The Department plays a significant role in generating greater economic impact and jobs for Wisconsin. The portal for traveler information can be found at: www.travelwisconsin.com.