Soak Up & Delve into Summer Exhibition

By: Amy Beck, marketing and communications manager on June 6th, 2018 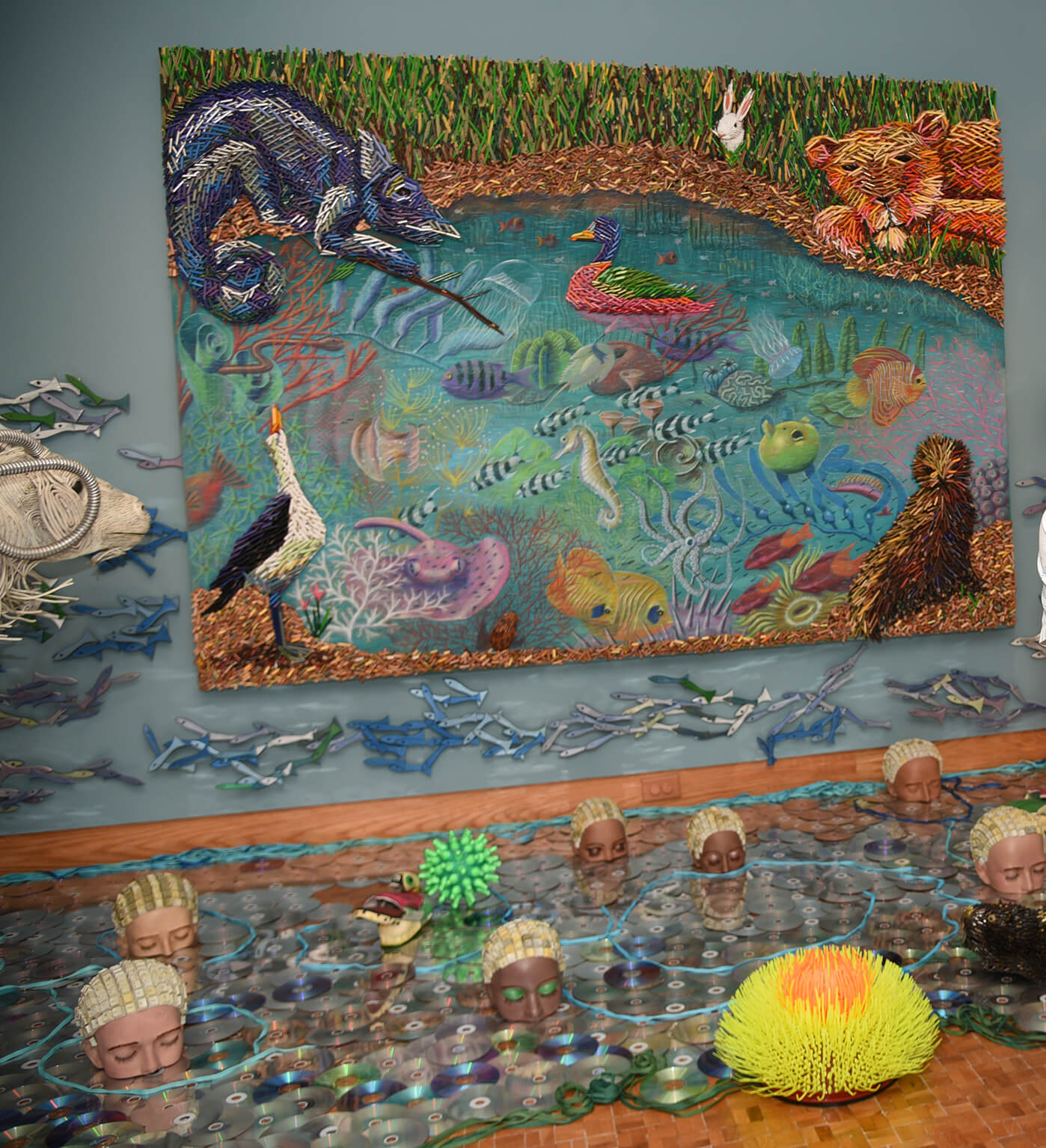 This summer’s immersive installation of colorful, assembled-object sculptures offers appealing options that beckon like a shimmering spot to swim. Bring children often to bob along the surface, soaking up sunny delights, and return solo and with friends for deeper dives. Look closely, bask in beauty, and emerge invigorated.

For The World According to Federico Uribe, on view at the Leigh Yawkey Woodson Art Museum through August 26, the Miami-based artist created a large-scale, walk-in environment – thought-provoking, yet brimming with joy. 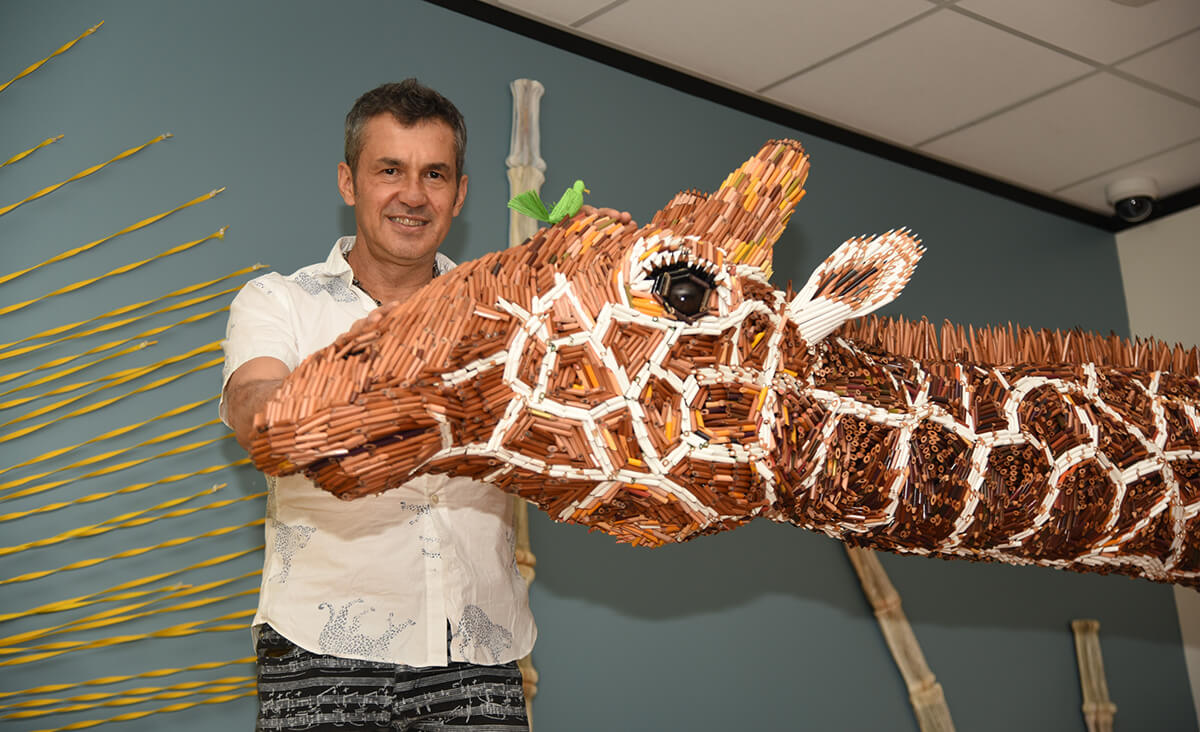 The idea of changing perceptions intrigues and inspires this artist. When Uribe received thousands of scissors, he used them to create sheep – his whimsical riff on shearing and fleecing.

“Objects have different meanings, like words. I like the idea of things that make me smile when I’m making them,” he said recently while installing his artwork at the Museum. “It’s about opening eyes to the possibility of creating beauty in the world wherever you are.”

By tapping into the emotional relationships people have with objects, Uribe strives to foster experiences that resonate, generate connections, and create lingering memories of joy. “You remember things that are emotionally interesting to you,” he said. Uribe assembles colored pencils, for example, into animal sculptures because most people have subconscious, good memories of drawing during childhood. “People cannot stop smiling when they see them,” he says.

Uribe’s work invites contemplation about design, too. Beyond practicality, he says, aesthetics and beauty are integral in every designed object. Chopsticks and forks both are eating utensils, for example, yet different aesthetic design decisions are conveyed throughout generations within various cultures.

Some Uribe sculptures are infused with irony – often conveying a reverse metamorphosis. He turns books into trees, shoe leather into animals, and bullet shell casings into bunnies. The surprising, sometimes startling, juxtaposition of materials and ideas prompts viewers to think, yet Uribe’s goal is clear. “I’m more interested in making people smile, rather than telling them what to think,” he says. 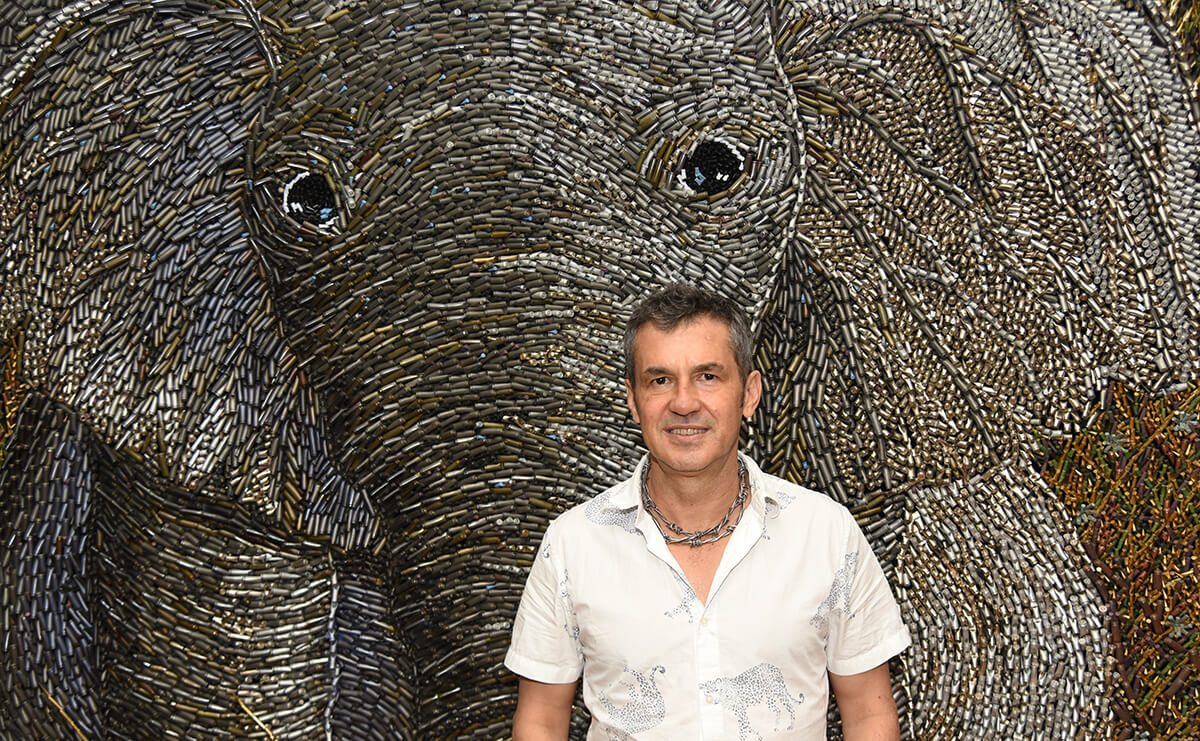 Amid decades of war in his native Colombia, Uribe grew up with the existence of violence, bullets, and those affected by them. “The sport of hunting doesn’t exist in Colombia,” he said. Yet in the United States, some hunters have viewed his bullet-shell sculptures as honoring their sport. Although such reactions surprise him, Uribe says he doesn’t design his work to promote any particular ideology. Instead, he aims to create sculptures that resonate with viewers. “To each his own,” he said. Using these shiny cylindrical objects and their varied connotations, he creates “beauty that has an echo of life.”

Ultimately, he says, life prevails and is worth celebrating. 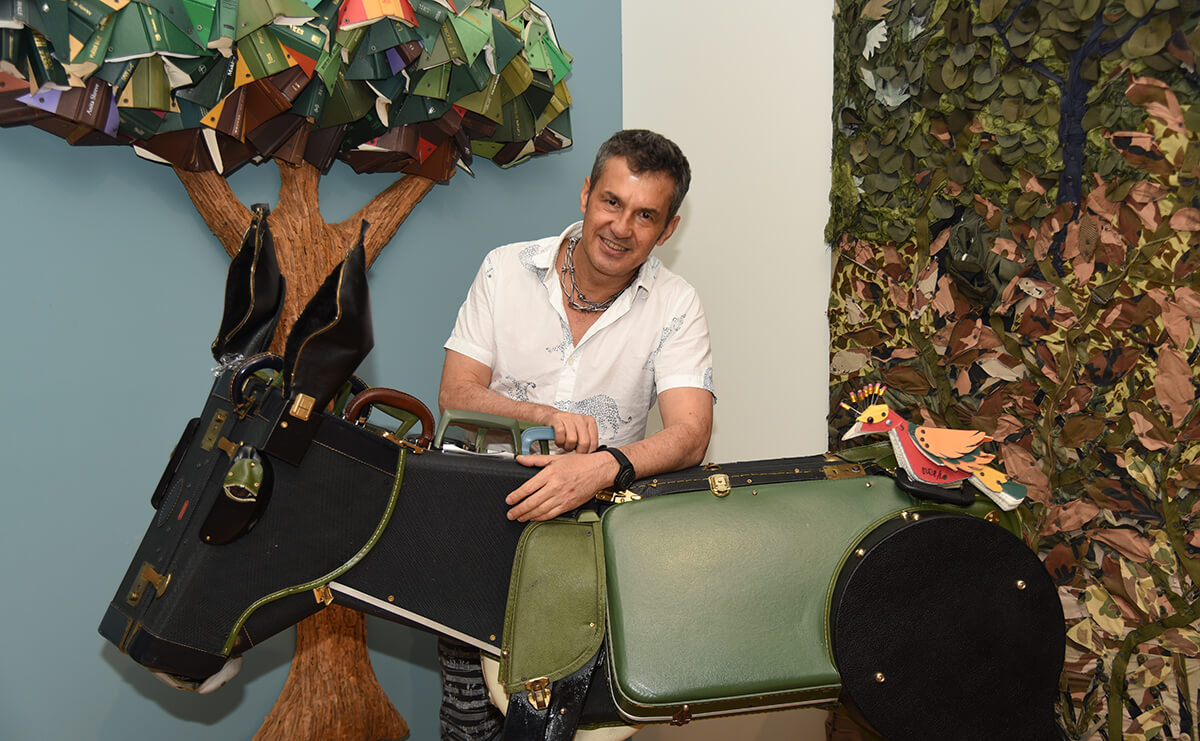 “I see the reaction; people are happy. It’s not really about impressing people with my skills. It’s about relating to people’s lives, souls, and humanity,” he said. “Anytime you create a good experience, it creates affection, and you smile when you remember it. Life is just one instant at a time; it’s all about these small moments of joy that we’re able to give to other people.”