By: Lisa Hoffman, curator of education on December 6th, 2017

Tradition and ritual fortify and enhance mental health and well-being. Societies are defined in part by shared traditions. My background is in sociology and comparative religious studies so I can go on and on for pages and pages about this topic. Carrying out traditions and rituals can, however, feel overwhelming, stressful, and unattainable precisely because December 6th (or whatever date is significant to you) does indeed arrive each and every year. The present battles the past and portends the future. That’s a lot of pressure.

It’s quite easy for a sweet tradition to become burdened and saturated with superstition. If the ritual isn’t performed in exactly the same manner, with the same participants, at the same time, with the same sentiment, on the same day . . . it will be flawed, its power sapped, its meaning depleted, its warmth deadened, its comfort hardened.

Nah. It just changes. What’s the old adage? Change is the only constant.

Our version of St. Nick’s Day is a holiday mash-up and a smidge made-up. In a high-school French class – a long, long, time ago – I learned about the little children of Lorraine leaving their shoes on the doorstep for the patron saint to fill with chocolate. The history and lore behind that endearing tale is a bit startling and scary . . . as are many backstories. But shoes filled with chocolate – who can’t get behind that? So, on my daughter’s first December 6th, a stocking (purchased new from a local discount store and not reeking of shoe or feet) was filled with an age-appropriate and safe infant toy. Ta-da. A tradition was born.

This December 6th, the stockings hang on the mantel but my daughter won’t be able to rummage through hers in sync with her brother. It’s a rule that they can’t dump their stockings but rather must remove treasures one at a time. Instead, my son will empty his behind a puppy-proof gate and then take the new stocking hanging on the mantel and embroidered with a “P” (for Piper) and share its St. Nick treat with said puppy, who I hope is on the other side of the puppy gate. And my daughter and her best friend will delight in different pre-filled stockings hanging by removable, paint-safe adhesive hooks in a dorm room. To keep everything above board, I’m requesting a time-stamped photo of the still-filled stockings on the morning of December 6th. 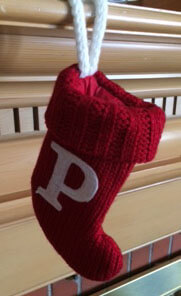 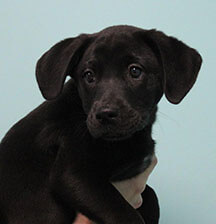 Embrace your “December 6th,” but not too tightly . . . give it room to morph. December 5th and 7th also arrive each and every year and also can be quite spectacular. 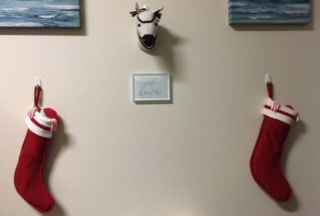 And Tuesday through Sunday – almost every day of the year – the Leigh Yawkey Woodson Art Museum is open and always admission free.

View the current exhibitions that encompass tradition, precision, care, practice, and artistry – Wild Fabrications and Explorations in Wood: Selections from The Center for Art in Wood – on view through February 25. Visit frequently. Or make a new tradition and visit for the first of many times.