By: Catie Anderson, curator of education on August 10th, 2016

by Catie Anderson, curator of education

A trusty loading-dock cart served as a makeshift coffee bar for volunteers who helped themselves to coffee, tea, and breakfast treats before boarding a motor coach bus headed for a visit to the Fox Valley yesterday.

Thirty-two Woodson Art Museum volunteers – docents, greeters, and gardeners – joined Lisa Hoffman and me for the August road trip designed to enjoy the gorgeous summer weather and make connections between the Woodson Art Museum and our Wisconsin colleagues. Our destinations included the Paine Art Center and Gardens, Fox River Brewery Restaurant, and the Oshkosh Publ­ic Museum.

Beginning at the Paine, our group was treated to wonderful walks through the elaborate English gardens of the Tudor-Revival estate.

Accompanying a group of the Woodson’s master gardeners, I soaked up some of their expertise and increased my own appreciation for the pristine gardens.

A highlight was a garden kaleidoscope featuring three spots where visitors can marvel at the fractured and geometric reflections of flowers and colorful mirrors positioned in a larger planter.

The historic structure was the dream of Oshkosh native and lumber baron Nathan Paine and his wife, Jesse Kimberly, as a summer home, which sadly was never realized. Construction of the mansion’s exterior began in 1927 and was completed in 1930. The Great Depression and two World Wars stalled the realization of the home’s interior until it opened to the public in 1948. Nathan Paine’s death in 1947 left Jesse to oversee the completion of the estate despite the knowledge that it would no longer serve as a private residence and instead would become a public museum for the city of Oshkosh.

Inside the stately Kasota limestone building, the visual marvels continued with sumptuous decorative arts, striking architecture, and gallery spaces featuring temporary exhibitions of sculpture by Gary Eigenberger – whose work also will be seen in the Woodson’s 2016 Birds in Art exhibition – and a large installation of first edition prints by John James Audubon. The Woodson group quickly took note of a pair of Belter slipper chairs featured in a guest bedroom of the Paine, which proved nearly identical to one currently on view in The Art of Seating galleries. 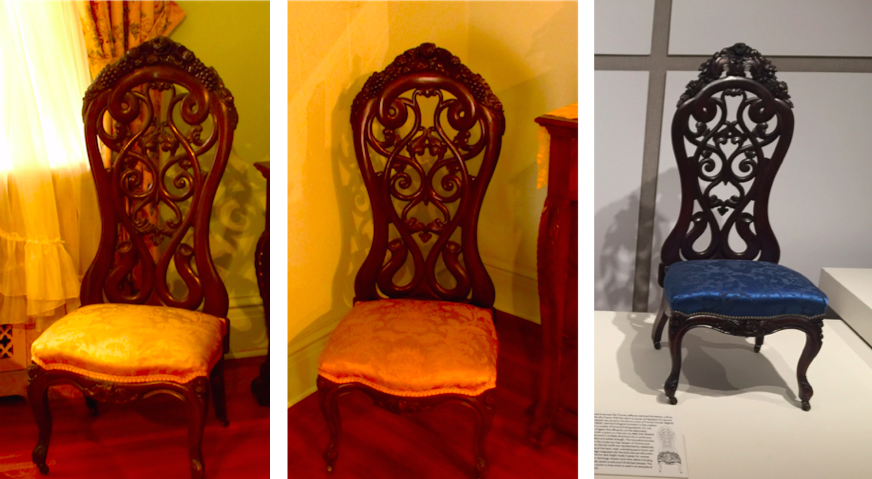 Our visit to the Paine was followed by a tasty lunch at the riverfront Fox River Brewing Company Restaurant; thanks to docent Diane Peterson for splitting two pizza options with me after I couldn’t make up my mind.

We dashed off to the Oshkosh Public Museum’s historic Sawyer Home where we were treated to a wonderful tour from marketing and membership coordinator Karla Szekeres, who highlighted the interior designs and original works by Tiffany Studios. The Tiffany stained glass windows featured at the top of the main staircase of the Sawyer mansion served to excite volunteers and Woodson educators in anticipation of the Museum’s upcoming Tiffany Glass exhibition, on view December 3, 2016 – February 26, 2017.

The day was filled with artistry, elegance, and discovery amongst a group of curious, lifelong learners and dedicated Woodson Art Museum volunteers; we couldn’t have asked for more from a summer road trip.

What delights have you experienced on day trips this summer?