By: Catie Anderson, curator of education on October 8th, 2014

Sometimes during staff meetings, if I’m not paying close attention or, at the other end of the spectrum, appear overly enthusiastic about an idea or program, I’m elected to lead it. This blog post is an example of the latter and an example of how my zealous attitude and punchy optimism allowed me to craft one of the most memorable Birds in Art experiences this fall. 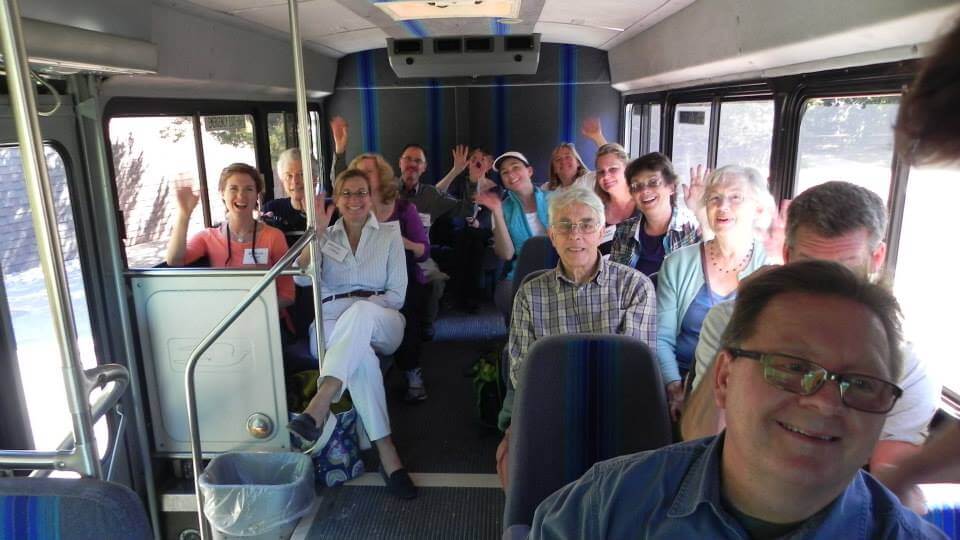 Seventy artists journeyed to the Woodson Art Museum in early September to celebrate the opening of the 39th annual Birds in Art exhibition. While their schedule of receptions, lectures, and demonstrations for the public fill up the time from Thursday to Saturday evening, Sunday affords opportunities for optional activities. This year, we invited artists to participate in an extra special visit to the International Crane Foundation (ICF) in Baraboo.

The trip was special for a number of reasons, especially the group of artists joining me, including 2014 Master Artist Barry Van Dusen, his dear friend and fellow artist Darren Reese, and Barry’s longtime artistic icon John Busby. 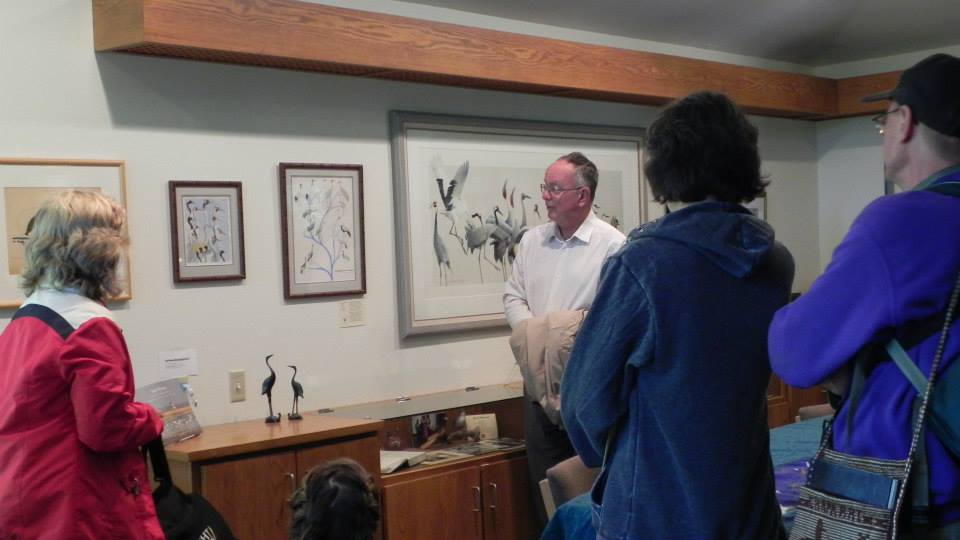 Our visit began with a warm welcome from Visitor Programs Manager Darcy Love and an introductory film on the history and mission of ICF. Love later guided the group throughout the grounds, sharing stories and information about the cranes – representing every contemporary species – and ICF’s impressive global efforts in crane conservation. Another highlight was meeting ICF cofounder and conservation legend George Archibald, who escorted us through ICF’s art collection in the Ron Sauey Library, named for the late cofounder who helped launch the organization in 1973. Artworks included names familiar to the Woodson Art Museum and Birds in Art extended family, evidenced by knowing nods of approval and satisfied sighs. As an observer, for me it was an opportunity to experience a room bursting with passion, talent, and knowledge, as well as modesty. 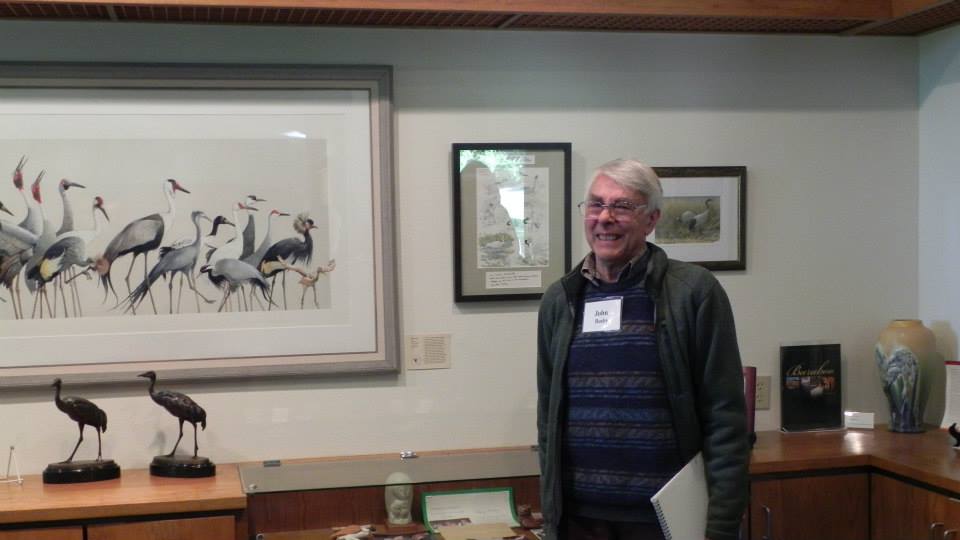 Artist John Busby beside his crane painting in ICF library.

An overarching theme of the Woodson Art Museum’s new permanent collection exhibitions is “environmental advocacy in art.” That narrative was beautifully illustrated during our library ICF visit. Owen Gromme’s painting of two whooping cranes, throwing their heads skyward in exuberant call, was reproduced to raise money for the fledgling organization in its early years. Most memorable was the crane watercolor by John Busby, who had to be egged on by the group to pose for photos near his work. For John it was a genuine moment of gratitude amongst his fans and friends, all of whom speak to the crucial role artists play in engendering a sense of civic duty and environmental stewardship through the emotional connections made to our natural world through art.

Throughout the picture-perfect day, subtle moments of reverence, awe, and respect could be observed among the group. Sketchbooks and camera lens poised to capture dramatic poses of prehistoric, enigmatic cranes were abundant, as were my attempts to keep the group moving along together (think herding cats on rollerskates).

When Barry offered to share images from his sketchbook along with ICF visit reflections on the experience, I was thrilled. Enjoy the following insights by Master Artist Barry Van Dusen and his sketches.

“We don’t see many cranes in New England, and I’ve only had a few chances to sketch them from life before, so the excursion to the International Crane Foundation was a great opportunity to spend some time with these charismatic birds!

“The Foundation has live specimens of every crane species in the world, and the variety to be found in the crane family was fun to explore with my pencil and sketchbook. Most of the markings that distinguish the various species occur on the birds’ heads and necks, so I concentrated especially on those parts in my drawings. I did three pages of contour drawings, where I tried to accurately record the shapes and markings of the various species, noting the species names as we worked through the enclosures. Some of the birds’ head shapes were quite unusual, like the Blue Crane. We had a bit more time with the Whooping Cranes, so I developed several full-body poses in my sketchbook. This was the first time I had seen Whooping Cranes, and it was thrilling to draw them from life! 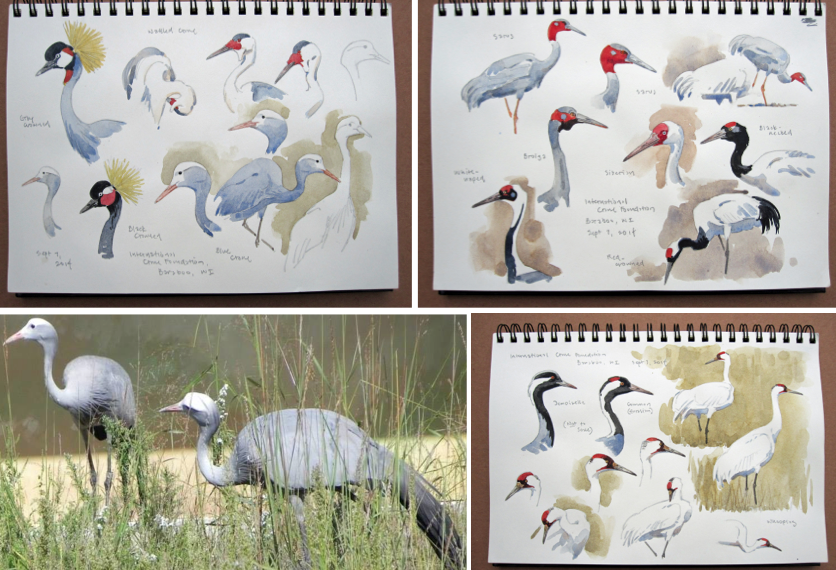 “When I got back to my studio the following week, I decided to add color to my sketches. I used the photos on the Foundation’s website to help me put the right colors in the right places. Finally, I added some background washes to help bring out the shapes of the birds – especially satisfying when working with white birds, like the Whoopers.” 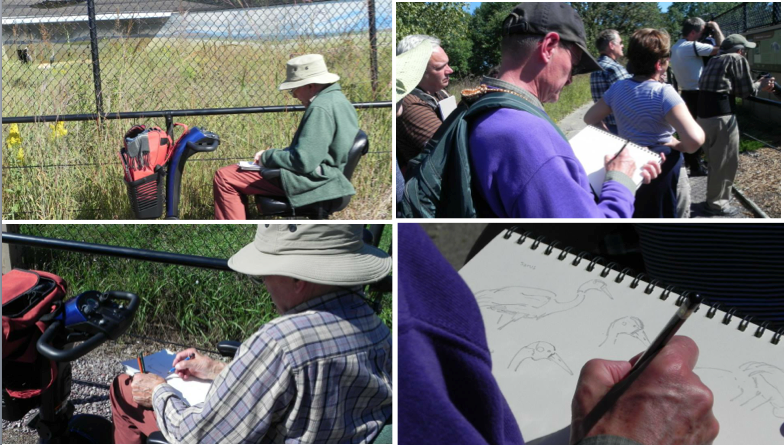 I knew having John Busby and Barry Van Dusen on the same avian-appreciation adventure would be memorable – the two sketching side-by-side near a crane enclosure, closely watching the gestures and movements of the birds, capturing their  subjects on paper with deft hand and keen eye is an experience I will long remember.