Wausau, Wisconsin: The Leigh Yawkey Woodson Art Museum announces British colored-pencil artist Alan Woollett as its 2019 Master Artist who will be honored during the Museum’s 44th annual Birds in Art exhibition this fall.

Woollett, the Woodson Art Museum’s 38th Master Artist, will discuss his career and artwork during his Master Artist presentation on Birds in Art opening day, Saturday, September 7, in the Museum’s sculpture garden, 9:30-10:30 a.m.

In announcing the 2019 Master Wildlife Artist, director Kathy Kelsey Foley said, “Alan’s mastery of the colored-pencil medium expands the high standards that define the Museum’s Master Artists. His artwork is distinct and distinctly his own. Alan brings new perspectives to the pantheon of Woodson Art Museum Masters.”

“My work has evolved over the years and I’m passionate about conveying the beauty of birds and the complexities and simplicity of these amazing creatures,” Woollett said. “Seeing my work in the Birds in Art exhibition alongside that of so many great artists never ceases to make me smile. It is really such an honor.” 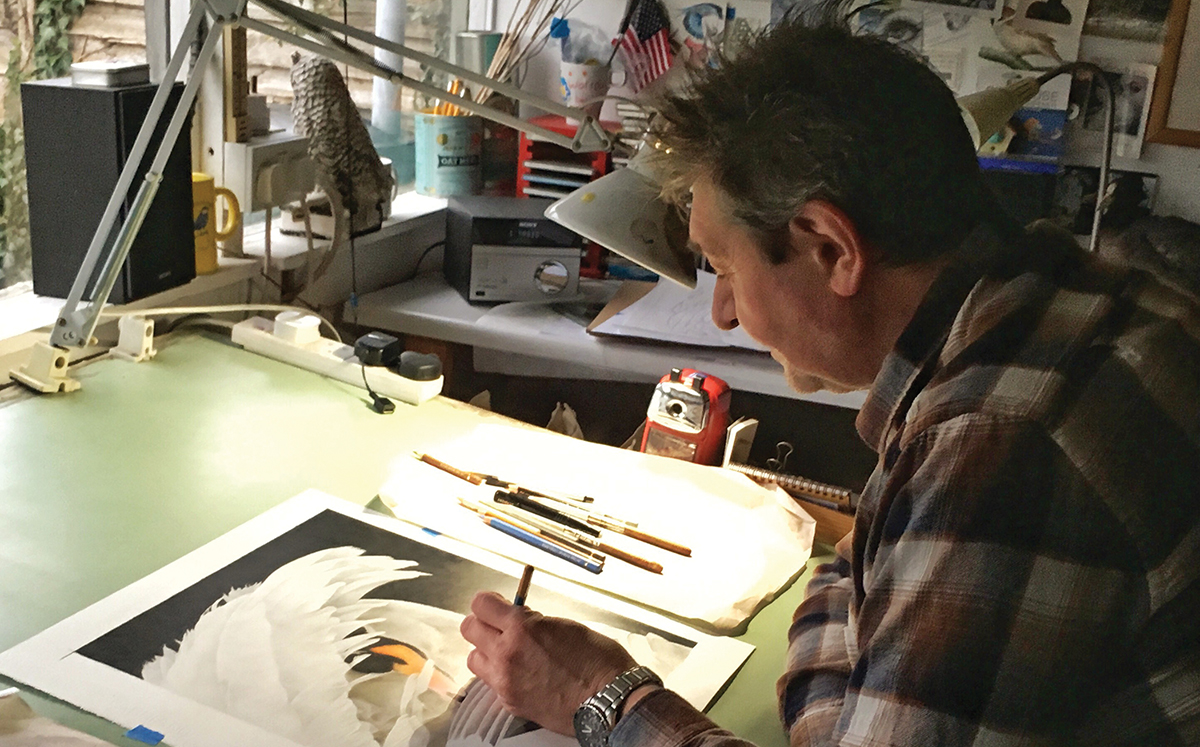 During his career, as Woollett’s choice of mediums gradually transitioned from graphite and watercolor to colored pencil, he strove to create artwork that would be selected for the Birds in Art exhibition. Determined to work harder each year to refine all aspects of his work, Woollett submitted artwork for the annual exhibition five times before he was successful in 2011 with a graphite work. “My first acceptance to Birds in Art was an incredible feeling; one I shall never forget,” Woollett said. Traveling from England to Wausau, his experiences during the opening festivities provided inspiration and fueled his motivation to improve. “When I initially scanned the galleries,” he said. “I knew I’d have to step it up even more, if I hoped to return.” Selected for inclusion in Birds in Art seven times, Woollett made the journey from England to attend the exhibition opening again in 2012 and 2015.

“I’m still taking in the fact that my work is deemed worthy of being exhibited alongside that of such esteemed and talented artists,” Woollett said of the Woodson Art Museum’s Birds in Art artists and previously named Master Artists. “It’s such a huge honor and one that has me still pinching myself most mornings when I sit to draw in my humble little studio.” A selection of Alan Woollett artworks will comprise his 2019 Birds in Art Master Artist grouping. 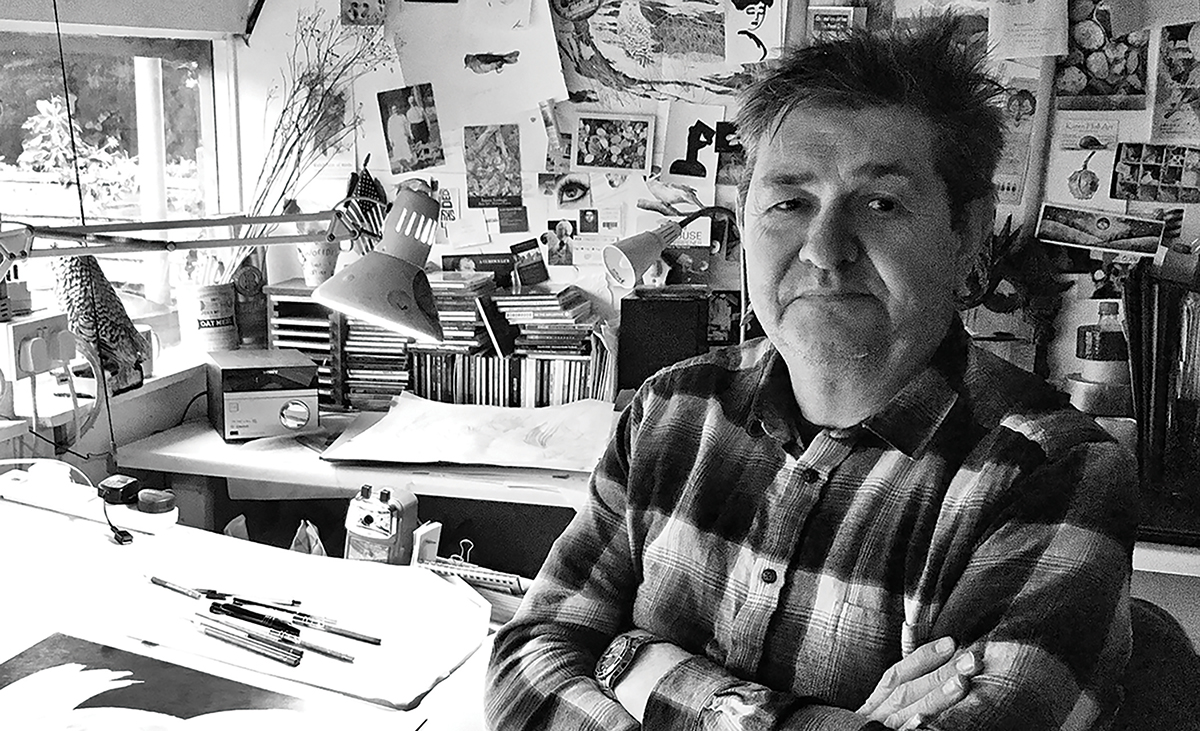 Born in 1964 in Chatham, Kent, England, Woollett’s interest in birds was sparked during winter backyard birdwatching as a young boy. His childhood drawing pursuits and an I-Spy Birds book given to him by his mother ingrained an interest that was to lie dormant until many years later. After high school and training to become a carpenter, Woollett shifted course and began studying graphic design at the Kent Institute of Art and Design, now called the University for the Creative Arts. His two years as a student there “reignited my passion for art, drawing, and the natural world,” and in 1993 he received an OND, Ordinary National Diploma, in graphic design and illustration. After college, Woollett refined his skills drawing with graphite “whilst seriously harboring a desire to paint these subjects in watercolor,” he said. A local naturalist and illustrator taught him how to use a paintbrush, and he focused on honing his painting skills during the next few years as a stay-at-home parent of his two children.

Gradually, he transitioned to working in colored pencil, after initially using them to add fine details to his paintings and then using them more extensively to complete his drawings. “I had always felt much more comfortable with a pencil in hand than a paintbrush,” he said. 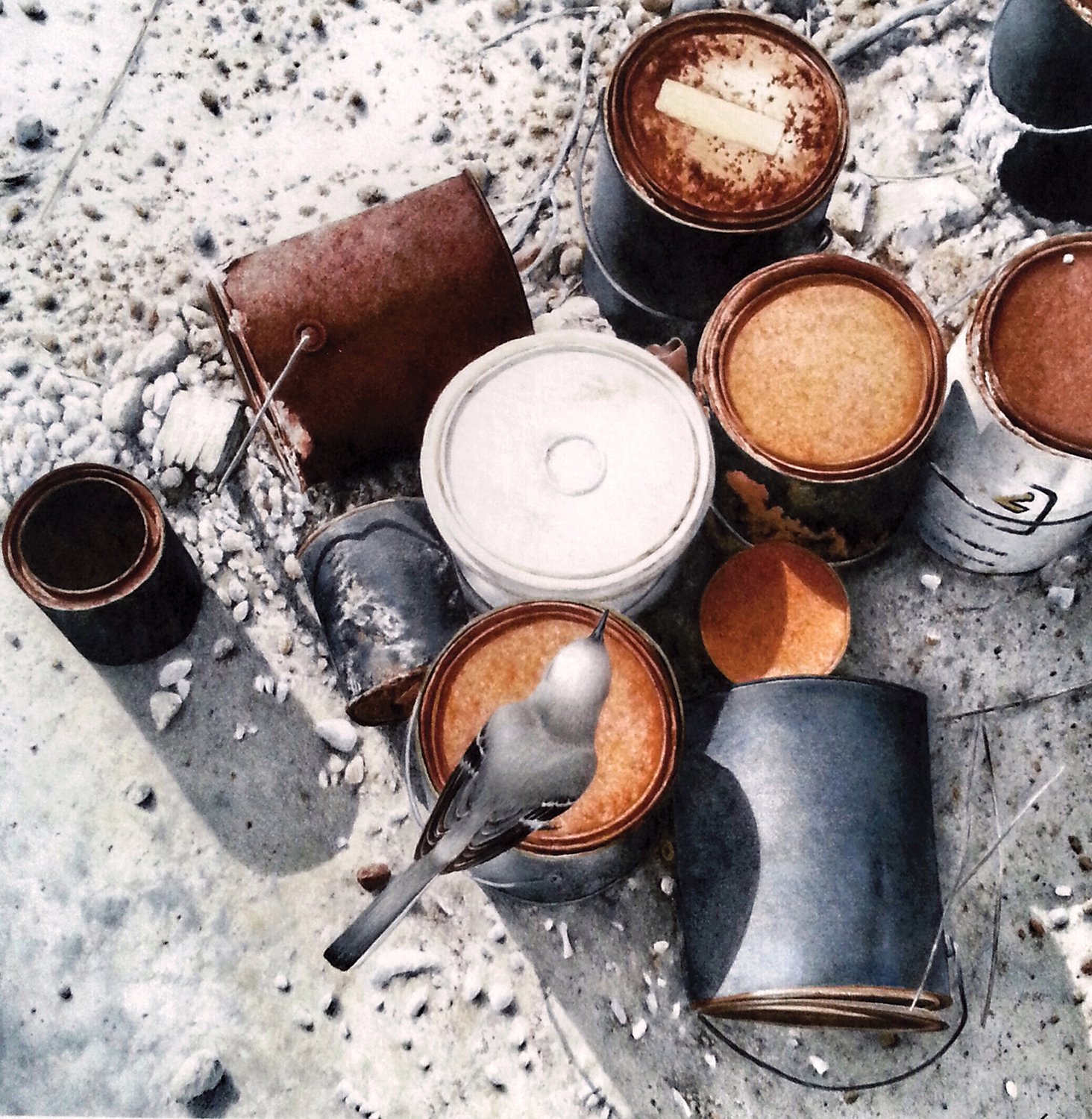 Woollett’s first colored-pencil work to be exhibited in Birds in Art, Northern Mockingbird, was acquired by the Woodson Art Museum in 2013, which he described as “a great feeling and an honor.” The striking, abstract patterns of the paint cans in this artwork and its unexpected perspective – the view from above the bird perched atop a lid – convey what sparked Woollett’s interest and served as a catalyst for the work. Although the gray bird flitting among the rusted paint cans initially caught his eye during a Sunday afternoon walk near an abandoned-building lot, “the colors, shapes, and shadows had me hooked. I just had to draw it,” he said. “Inspiration often comes from unusual sources.”

Although birds provide Woollett with endless sources of inspiration, the “key to my motivation is seeing that fleeting glimpse of a kingfisher in bright sunlight, or the way snowfall on a simple log pile can transform it into an eye-catching abstract design,” he writes in his book Bird Art, published by Search Press Limited in 2017.

Woollett’s artwork has been featured in exhibitions throughout England, including at the National Exhibition of Wildlife Art at the Gordale Garden Centre, Burton, South Wirral; seasonal exhibitions at Francis Iles Galleries in Rochester, Kent; and the United Kingdom Colored Pencil Society at Menier Gallery in London. His awards include Earth’s Beautiful Creatures Award, 2016, Wildlife Artist of the Year, from Mall Galleries in London, and Bird Artist of the Year, 2000, by Birdwatch Magazine.

He lives and works in Maidstone, Kent, England, with his wife, two children, and two springer spaniels.

The 2019 Birds in Art exhibition, on view September 7 through December 1, will feature a selection of Woollett’s artwork along with more than 100 original paintings, sculptures, and graphics created within the last three years by artists from throughout the world. The exhibition’s full-color catalogue, featuring an essay about the 2019 Master Artist, will be available for purchase in September at the Woodson Art Museum.