Early in December, Woodson Art Museum members, visitors, and staff gained a global perspective on headwear over a weekend filled with programs at the Museum with curator Stacey W. Miller. A portion of Stacey’s extensive hat collection can be seen in the Global Language of Headwear: Cultural Identity, Rites of Passage & Spirituality on view through February 26 at the Woodson Art Museum.

Stacey’s collection features hats from more than 150 countries and even more ethnic groups. During her visit to Wausau, she shared what she learned about the regalia through research, communicating with groups on her travels, and even staying connected with individuals on social media. Seeing the hats on display and making connections through her stories truly brought a global view to the Midwest on the many ways to celebrate, worship, or mature.

Stacey W. Miller tours the exhibition galleries with Museum members and visitors and shares stories about hats in her collection.

Audience members were curious about the represented cultures and made connections a little closer to home. Some wondered why in North America and many northern European countries, people stopped wearing hats in the mid 20th century. Stacey isn’t certain, but suspects it might have been the availability of the car. Once the car was more accessible, there was less waiting in the cold and hats might have become a hinderance when moving in and out of cars. Though hats aren’t as common in America, Stacey drew a point to the baseball cap and how widely it’s worn. Its form is iconic, and it can tell a lot about the person wearing it including who they root for, what brands they enjoy, or where they went to school. 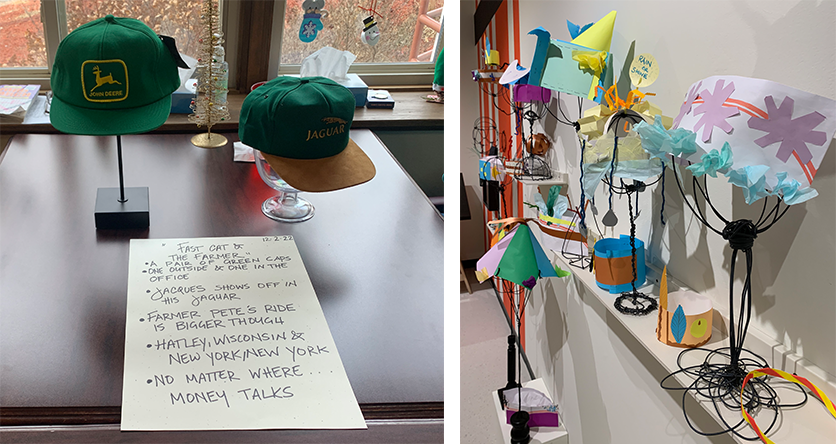 In colder climates, I think we have a second version of the baseball cap (and it’s not just the Stormy Kromer, which is a good option and also on view at the Woodson Art Museum in Stormy Kromer: Evolution of a Classic). It’s the beanie.

On New Year’s Day, I had the pleasure of attending my first Green Bay Packers game at Lambeau Field. Let me tell you, I saw the beanie in action. Everyone had something on their head, and it wasn’t all cheese. I couldn’t help but not make connections between the celebration of gameday and the stories shared during Stacey’s time at the Museum. 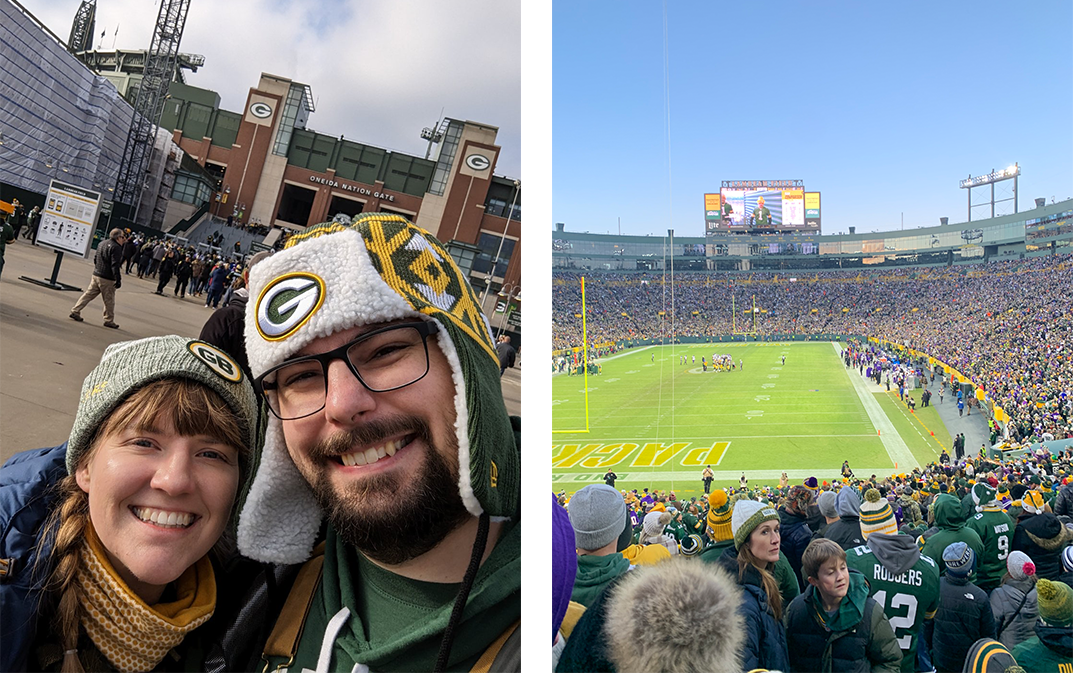 My husband and I enjoying the game and the view of fans at the field.

Like all good hats, the beanie has substance to its style. It keeps you warm in the winter, but also can represent a little bit about you. This representation can be through a logo attached to the front or through the color scheme. There are endless alterations that can make it work for anyone.

At first glance, other cultures’ customs might seem different to ours, but when it gets down to it, we are all just humans doing our human thing. In the Midwest on a Sunday, that means putting on your green and gold overalls, painting your face, and putting a wedge of cheese on your noggin. For me, I’ll stick to the beanie. After all, cheese doesn’t keep your ears warm.