By: Andrew McGivern, curator of exhibitions on March 22nd, 2017

A key component of the Woodson Art Museum’s flagship Birds in Art exhibition is the Museum’s Master Artist recognition for achievement within the avian-art genre. This tradition began with Wisconsin’s Owen Gromme in 1976 and over the years has highlighted the work of an international cast of thirty-six artists. 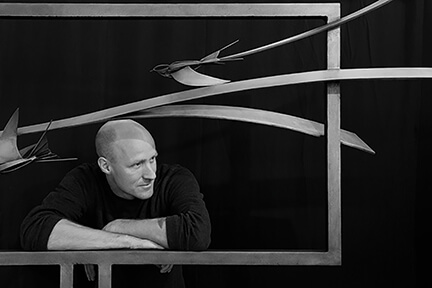 The 2017 Master Artist, announced March 16, is Wisconsin sculptor Don Rambadt. In Don’s distinctively loose, interpretative style, he bends geometric metal shapes and welds them together, highlighting identifying markers of his avian subjects without all of the detail. 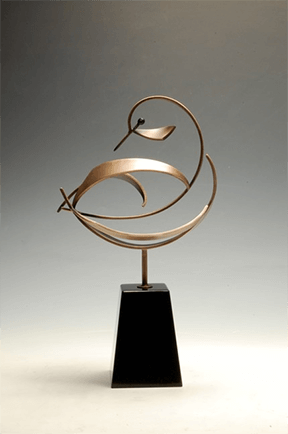 Rambadt’s sculpture, with its minimal use of material, captures his subjects’ gestures with the simple use of line, not unlike an artist wielding a pencil. You might say Don’s work offers an interactive component in that it prompts viewers to fill in the sculpture’s open space by visualizing the bird to complete the image. 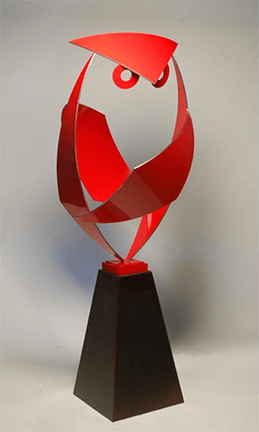 Birds seem ephemeral as they dart from branch to branch. Don captures this action in some of his wall-mounted sculptures; sweeping lines in metal follow a bird in flight and create a visually lyrical display. In that way, Don’s welded sculptures can be compared to the work of a poet, offering cues and suggestions, but keeping the work vague enough to allow room for interpretation. 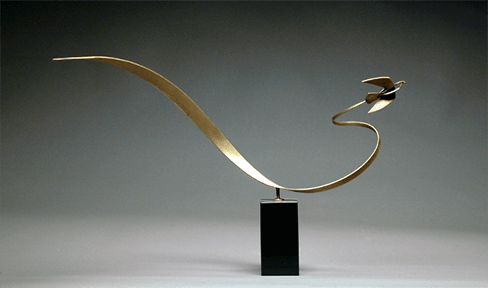 In the fall of 2015, I led a Woodson Art Museum members tour to Milwaukee to visit museums, galleries, a sculpture garden, and an historic site. In addition, we spent time at Don Rambad’s studio; he discussed his work and demonstrated welding behind a large protective screen. Our tour group loved the visit and the care Don took to explain what he does. Since then, Don has moved into a new studio space that I look forward to seeing. 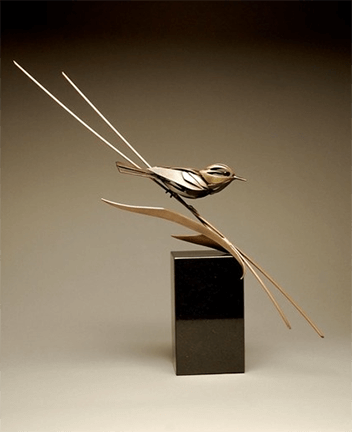 Congratulations, Don, on well-deserved recognition. We look forward to working with you in developing your grouping of artwork and tending to the myriad details leading up to the opening of the Museum’s 42nd Birds in Art exhibition on Saturday, September 9.

What do you love most about Don’s sculpture?