By: Lisa Hoffman, curator of education on February 28th, 2018

Nellie is sophisticated, older, and receives private, in-home lessons. Mike and Molly are a bonded pair displaced by Hurricane Harvey. Ellie Mae’s pedigree is a smidge dubious (a further explanation follows), and Piper is a bounding, Tennessee ball of energy. Puppies . . . plenty of puppies. Our staff of fewer than twenty-five is currently raising five dogs, each younger than one year.

Nellie began the trend. Nellie’s predecessor left a void and after she – along with a refined palate that favors only the finer treats – curled up in one of the householder’s laps, puppy love commenced.

Mike and Molly ran the oldest con in the book . . . being irresistibly cute while a family popped by just to play with and exercise rescued shelter dogs. The adoption was approved, collars and leashes affixed, and the vehicle was loaded with dog supplies, in less than forty-eight hours. Subsequently, several country acres were encircled by an underground fence, and Mike and Molly have been on the go within that realm ever since. 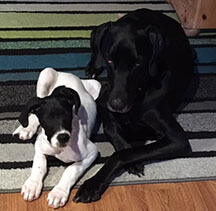 Sarge needed a playmate. He too has a country yard (and chickens) to entertain him, but he would benefit from a companion. Enter the sweet, loving Ellie Mae . . . all playfulness and snuggles. Her lineage says “Great Dane”; her stature implies mini-horse. Equine or canine . . . Sarge adores her (most days).

Piper – also a rescued shelter dog – is all wriggling, wagging, and bounding BlackJack (Black Lab and Jack Russell terrier mix). Boy and Girl wanted a puppy to love, raise, and embrace. Householder did not. Boy and Girl (and puppy) won. Householder since has been caught – but vehemently will deny – kissing said puppy on the head. 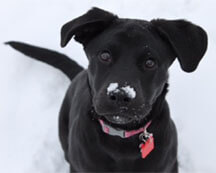 No matter the lineage, the reason the puppy was desired, or what ensnaring, mesmerizing spell was cast, puppies are a catalyst of conversation, diversion, joy, and mindfulness. Even if you never fall “prey” to a puppy, it’s difficult – if not impossible – to not grin when viewing a photo or video of a playful puppy.

Art has a similar effect. No matter the subject, medium, or style, sharing art prompts conversation and thought – touchpoints of contact between people, strengthening connections. Visit the Woodson Art Museum and view National Geographic’s Rarely Seen: Photographs of the Extraordinary – on view March 3 through May 27, 2018. Experience the transformative power of photography. The gallery may be your location, but your mind and imagination will be transported to a volcanic eruption in Tanzania, or a Patagonian glacier, or Thor’s Well in Oregon.

Further explore the galleries and delight in Eric Rohmann’s Caldecott Medal-winning illustrations – on view March 3 through May 27, 2018. The sweet antics of My Friend Rabbit, the four kittens exploring the seasons, the tiger who elicits “oh, no” from those in his presence, and birds and dinosaurs in a fictional natural history museum are just a few of the characters and scenes “living” in the galleries.

And the puppy-fever continues to rage. There are rumblings that another puppy (or perhaps an adolescent one) may soon find a home with another Museum staff member. Stay tuned. 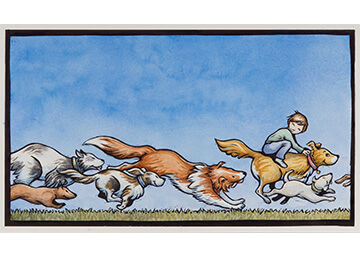