The Allure of Illusion

By: Catie Anderson, curator of education on January 29th, 2014

Bullet catches, necromancy, water-cell escapes, and exotic realms fill the dramatic posters of Mystery, Magic, and Mayhem now on view at the Woodson Art Museum. The colorful exhibition features thirty-one prints depicting the acts of famous American and European magicians and designed with enticing graphics to sell tickets. Much like movie posters or album covers today, these highly stylized posters communicate to audiences the tone, appeal, and the unique angle of a performance.
Late-nineteenth-century marketing, as illustrated through these prints, gives us insight into the social cues and trends of Victorian culture. Distant lands held fascination for theatergoers; posters, props, and sets were designed to mimic the perceived luxuries of the East or cash in on current events like the 1922 discovery of Tutankhamun’s tomb in the Valley of the Kings.
Spiritualism, the occult, and all things macabre also were equally appealing in this era, and magicians crafted deceptive illusions, which convinced many that communing with the deceased was possible. Mentalism, or mind-reading/manipulation, is a powerful psychological phenomenon that captivates today’s audiences just as it did those over a hundred years ago.
Trim tuxedos, beautiful assistants, and the ever-popular devilish imps perched upon the magician’s shoulder painted pictures of prestidigitators as clever, classic, and charming performers whose elegance and perceived worldliness filled theater seats and street corners. Magicians were billed as the sexy bad boys of the turn of the century – brave, dangerous, and confident – some even bordering on exhibitionists.
Harry Houdini, for example, performed his public escapes nearly nude to prove to onlookers he was not hiding any tools that would assist in his maneuvering out of cuffs, chains, straightjackets, or locked trunks. The other reason for Houdini’s minimal attire? The opportunity to showcase his lean, muscular build – Houdini was a sex symbol during the heyday of his career. His Hungarian mother and magician’s assistant wife, Bess, tolerated Houdini’s bravado and ruthless competitive spirit as he built a monumental career for himself in the Western hemisphere. 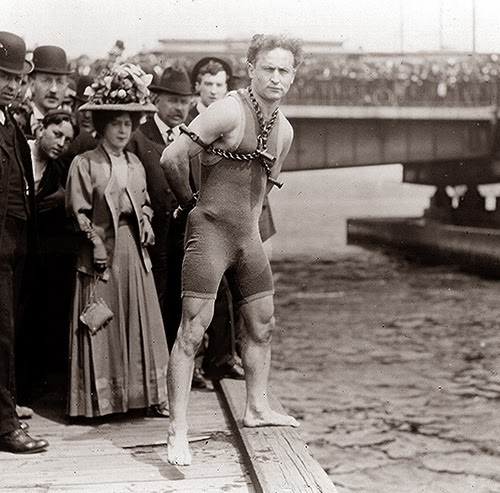 Despite many ghoulish and dark themes, the history of magic also is filled with comedy and playfulness. Take Eddie Diijon’s famous flea circus of miniature gilded chariots, carriages, and acrobatic apparatus. Sleight-of-hand wizard Cardini developed an onstage persona as a tipsy socialite whose sleeves produced endless cards and cigarettes. Harry Blackstone, Sr. – a dynamic illusionist – also offered a softer side to magic, engaging thousands of American children with his gentle humor and fluffy white rabbits produced for young participants.
Behind these larger-than-life personas are the stories of men and women whose dedication to their craft and showmanship was itself an art form. Learn more about magicians, Brian Selznick’s career as an author and illustrator, and how the art of illusion has stood the test of time by engaging with in-gallery materials during your visit. Equipped with an audio tour, activity guide, and video installations in the galleries, your Woodson visit is sure to be magical and memorable. Don’t miss the exciting new Art Park interactives – including a mini-theater where children and families can learn and perform basic tricks and more – in the Museum’s lower level.