By: Amy Beck, marketing and communications manager on November 8th, 2017

On temporary loan in my office is a treasure trove. 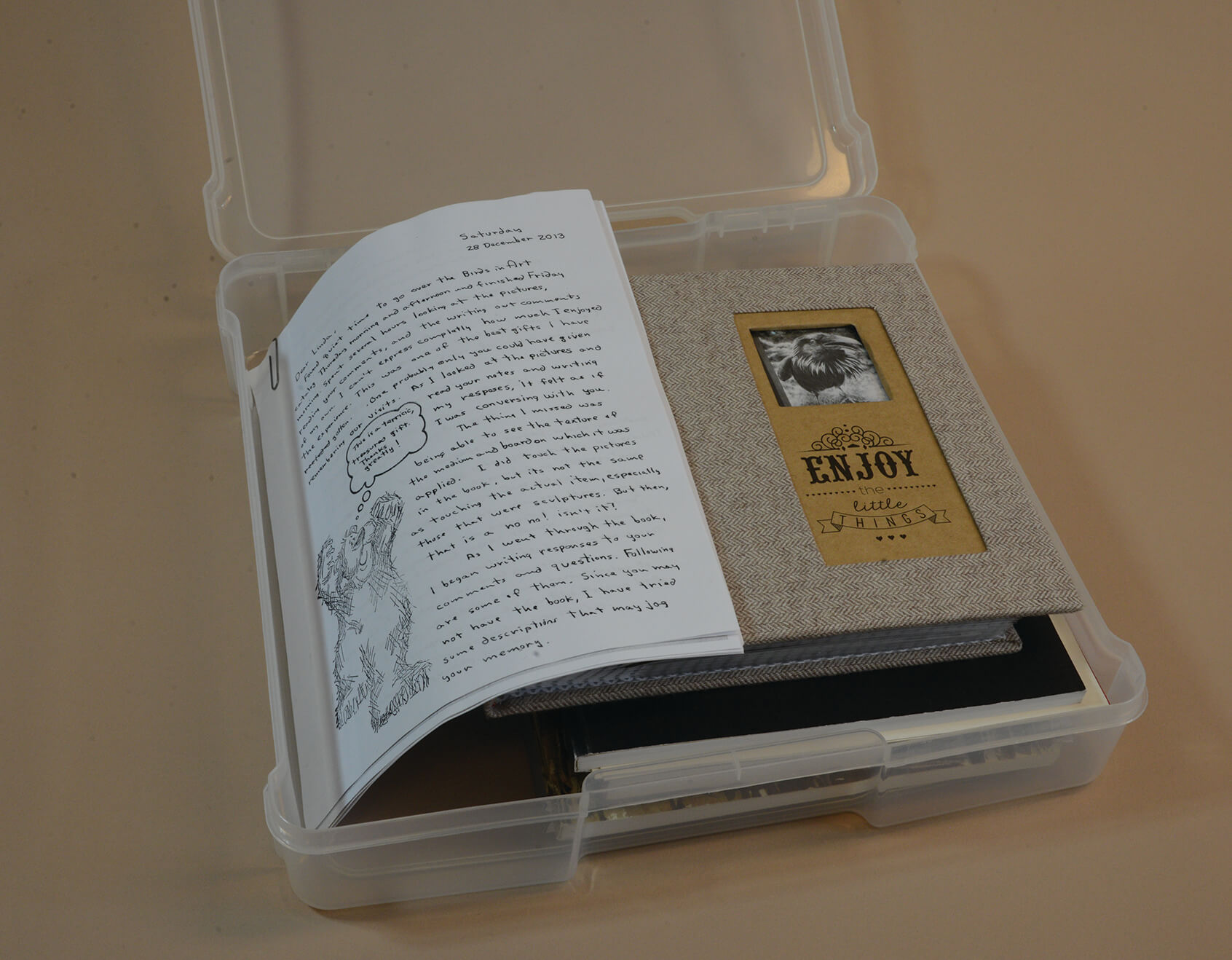 Tucked away in a plastic bin, one floor above galleries filled with artwork, are jotted comments and observations from a Wausau visitor about hundreds of Birds in Art artworks from the past five years, and letters replying with comments about the comments.

These notes and letters are evidence of a legacy of extraordinary engagement with the artwork and between two people – a father and daughter-in-law – who developed and maintained an annual Birds in Art tradition throughout nearly two decades. 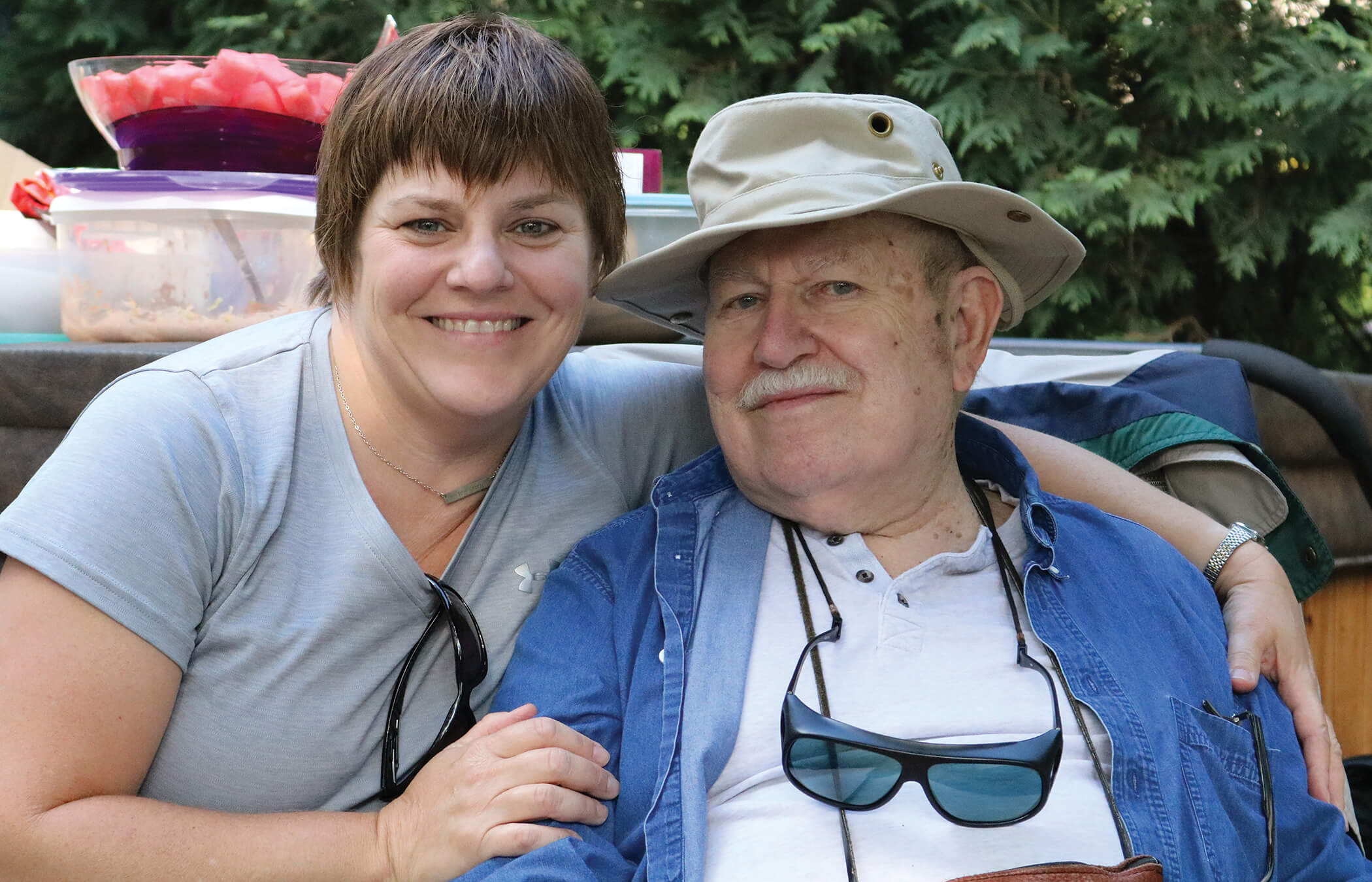 The story begins as traditions often do, with one person suggesting an activity and another tagging along – less interested in the topic than in pleasing the other person. In Linda Ramthun’s case, she wondered “what’s the big deal about birds?” but shrugged and first accompanied her father-in-law, Jim Ramthun, to the Woodson Art Museum during Birds in Art in the late 1990s while he was visiting from his home in Milwaukee. A retired public-school science teacher, Jim was intrigued, so Linda humored him. They strolled the galleries, looking at the artwork and talking about which ones caught their eye and why. Their Museum visits became a tradition each fall until Jim’s stroke in 2008. After that, Linda traversed the galleries each fall with Jim in a wheelchair until he could no longer make the trip in 2013.

him. She spent solo hours in the galleries, jotting comments on index cards or sticky notes that she placed on each of more than 100 artworks in the Birds in Art catalogue which she gave to him as Christmas gifts each year. Her letter in 2013 reveals the genesis of her virtual-visit project that she would continue for four years. “Birds in Art 2013 was not the same without you guys. I decided to bring the exhibit to you with comments,” she wrote. “It is a gift I couldn’t wait to share with you and in the end it has given so much back to me.” 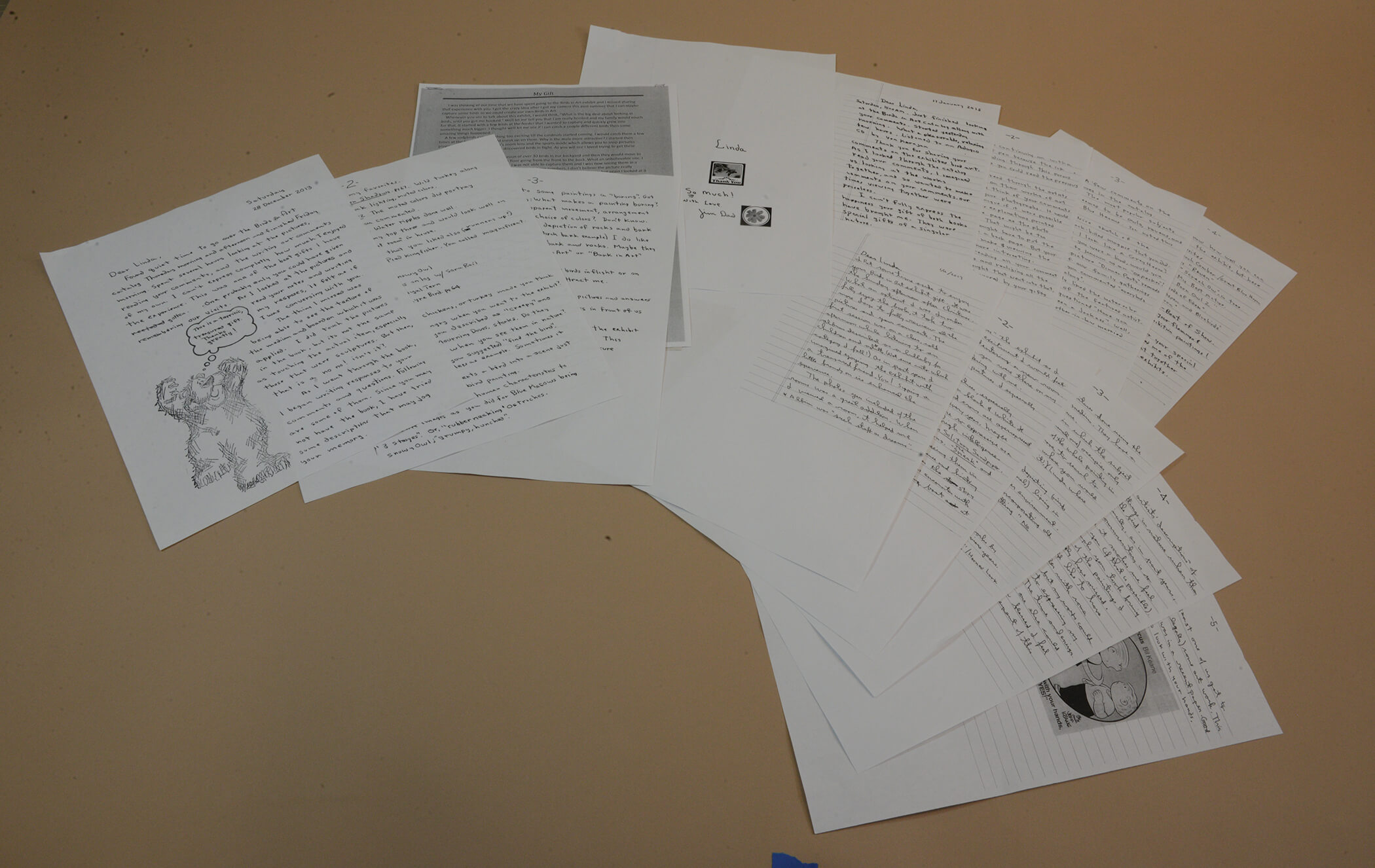 From Jim’s first response written three days after Christmas in 2013 and then every year, it’s clear Jim also spent hours pouring over dozens of artworks in each year’s catalogues, considering her observations and replying with comments of his own — just as they’d done via their in-gallery conversations.

In his letter written Dec. 28, 2013, Jim wrote, “This is a terrific treasured gift. Thanks greatly! This was one of the best gifts I have gotten. One probably only you could have given remembering our visits. As I looked at the picture and read your notes and writing my responses, I felt as if I was conversing with you. I felt as if I was experiencing the exhibit with you as I went through the catalogue. This will be an experience/gift I will treasure as long as my memory holds out.” 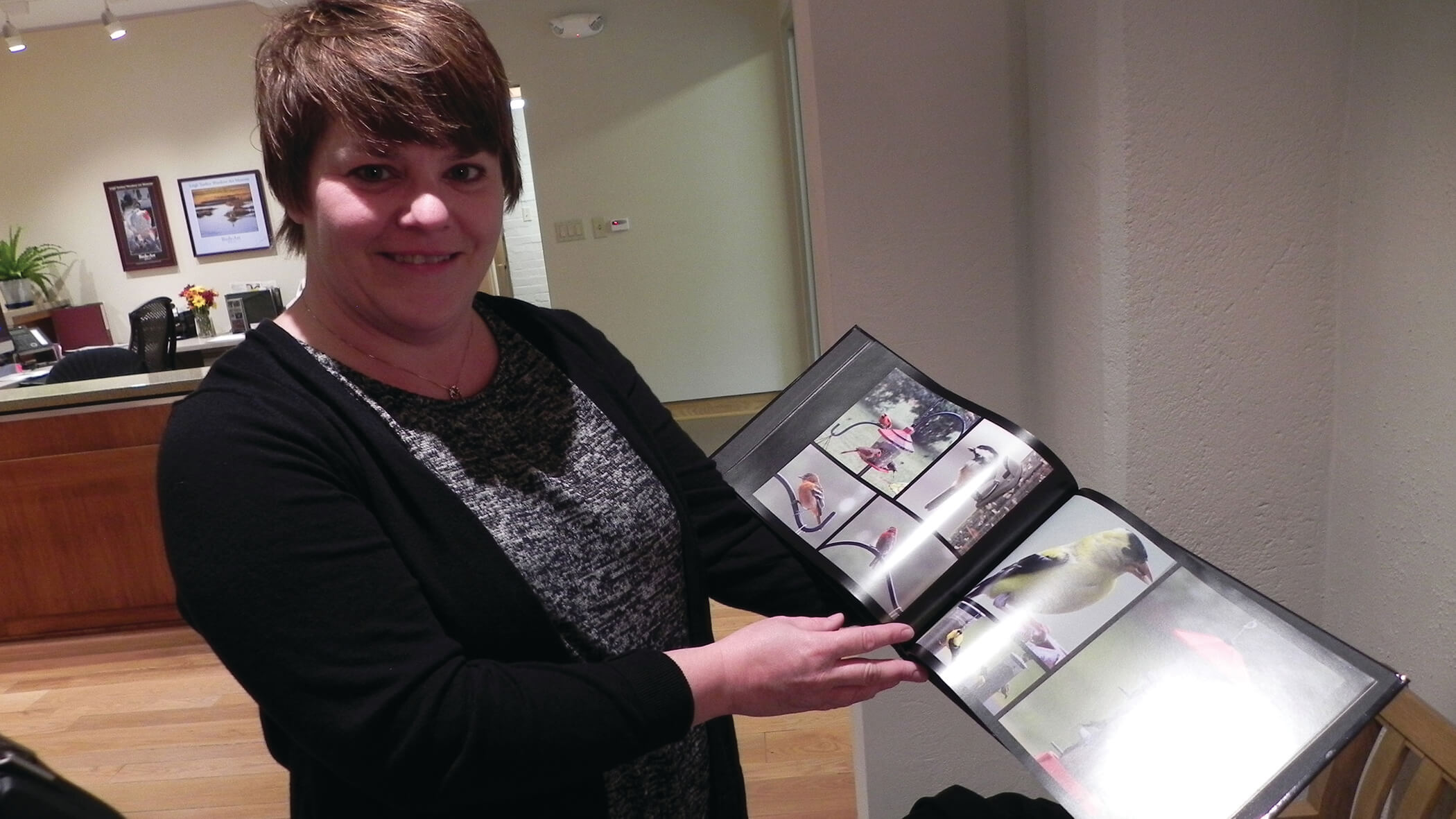 In 2014, Linda created her own “catalogue” with photos of birds she’d taken and printed in a hardcover photo book. Her initial disinterest in birds had transformed throughout the years first into a hobby and then a passion. The avian-themed artwork prompted her to place a bird feeder in her backyard.

Then she began a fervent pursuit of photographing birds so she could share the photos with Jim, the father-in-law she always called Dad. 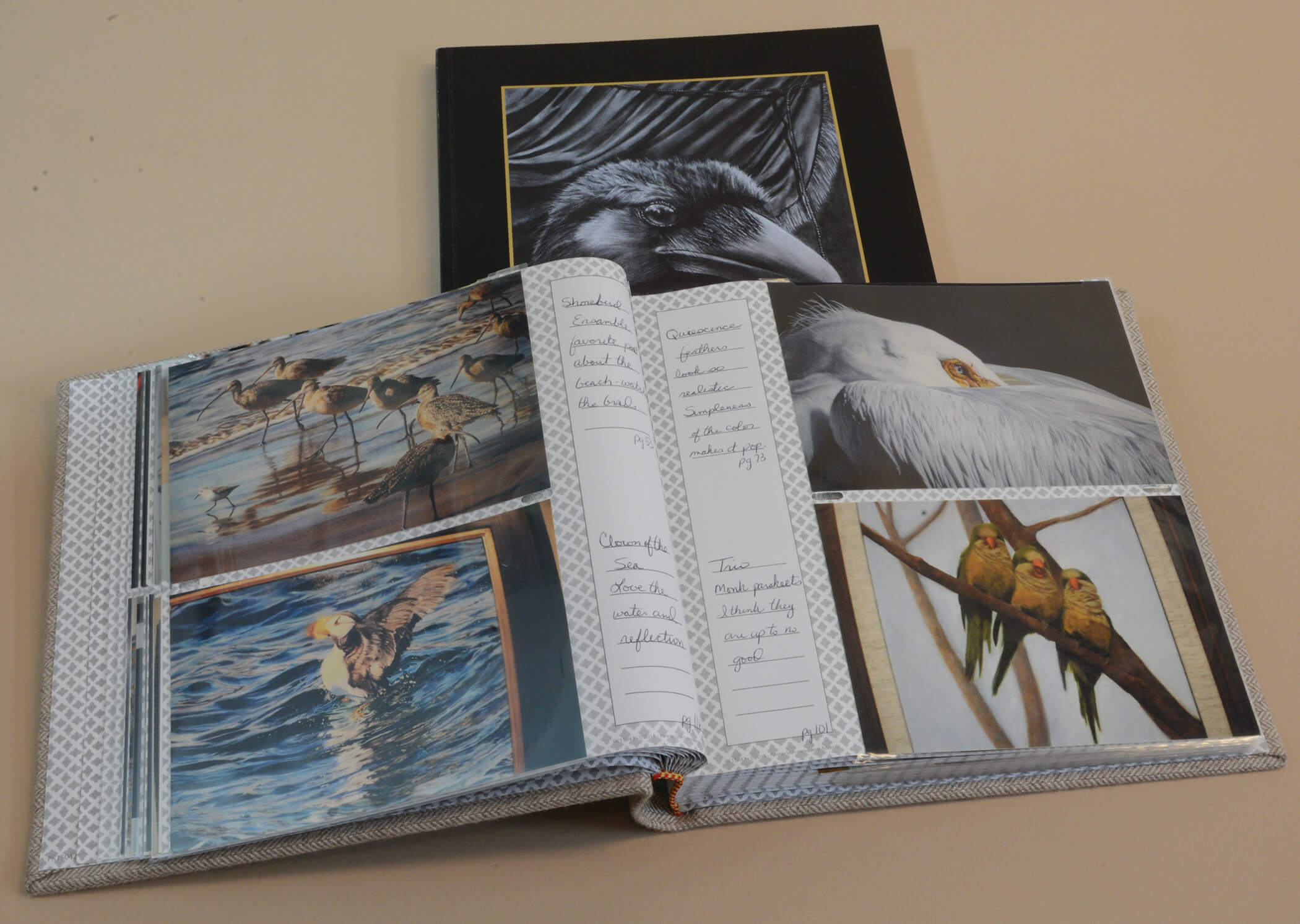 In 2016, Linda realized that she could take photographs of Birds in Art artwork in the galleries, so she assembled a photo album of eighty-seven images with her comments in the margins, also noting the catalogue page for each so Jim could read more about the artwork and each artist’s accompanying narrative.

Jim died in May 2017; four months earlier, on January 12, he wrote: “As in past years, your commentary is so special as it makes me feel closer to you (if that is possible) . . . my words could not come close to expressing my love for you. The time and energy gift is one no one else could have given. How blessed I feel by being the recipient of this gift. Love, Jim Dad”
He signed his letters this way, Linda said, because he never wanted to impose upon her relationship with her own dad.

Linda and her daughter Katelyn visited the Museum together on Jim’s birthday in August. The depth of Linda and Jim’s story came to our attention only when Linda inquired at Visitor Services about making a tribute-fund donation in honor of Jim.

Linda’s treasure trove is evidence of the extraordinary connections these two made with the artwork and each other, sparking curiosity that led to passionate pursuits that neither could’ve predicted. 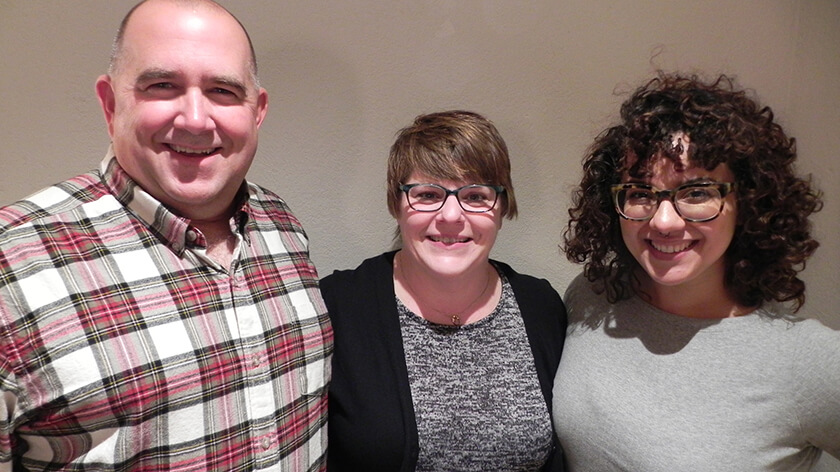 Dave and Linda Ramthun with Roselyn Almonte of StoryCorps

Linda and Jim’s story is a marvel. She was gracious enough to share it in a recorded conversation with Dave, her husband and Jim’s son, while StoryCorps was here recording fifteen sets of conversations about the Museum’s impact on community members’ lives – a gift from the Institute of Museum and Library Services as part of winning the 2017 National Medal. The Ramthuns’ 40-minute recorded StoryCorps conversation, and those fourteen others, will be preserved at the Library of Congress.

I can only imagine how heartening the Ramthuns’ story must be for my co-workers who’ve devoted years of their professional lives toward developing Birds in Art throughout the decades and who strive daily in many varied ways to foster just such visitor engagement with the artwork and each other.

Here’s hoping Linda and Jim’s tradition will continue with a new generation. I can’t help but wonder: what other stories are out there to discover? We’d love to hear yours.