Where Once There Was a Square, Now There Is a Story

By: Catie Anderson, curator of education on December 11th, 2019 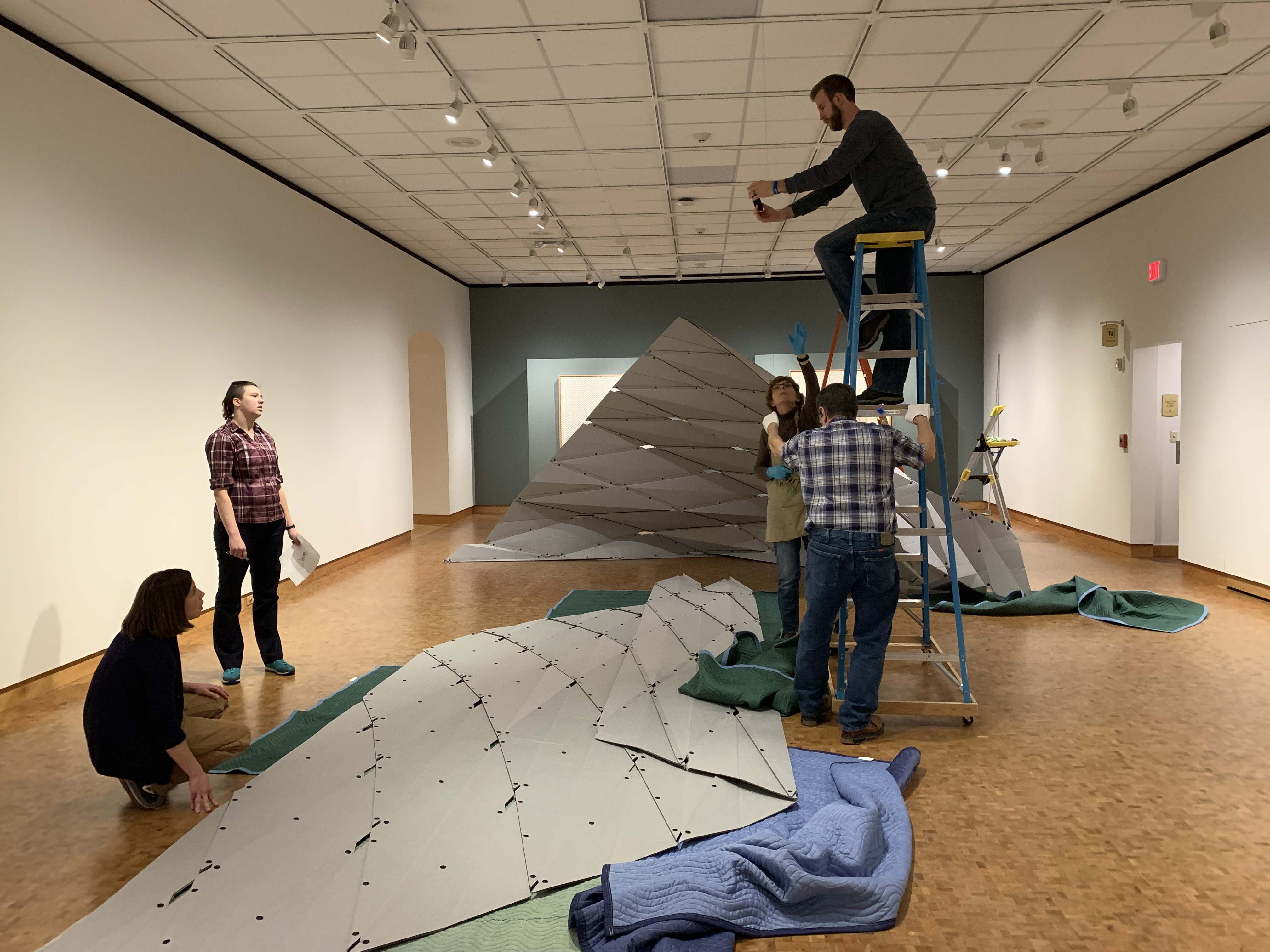 Three new exhibitions opened Saturday at the Woodson Art Museum – Above the Fold: New Expressions in Origami, FaunaFold, and Alchemy Unfolding – transforming the freshly de-installed galleries from blank boxes into immersive spaces, a metamorphosis not unlike those generated by origami artists who create captivating, multidimensional designs from squares of paper.

Where once there was a crate (more than 20’ long), now there is Ruga Swan, artist Jiangmei Wu’s graceful gray sculpture spiraling across the gallery. Ruga Swan’s impressive presence is the result of several hours of work by six Museum staff members and International Arts & Artists registrar Eileen Streeter.

Where once there was a wall, now there is Vertical Pond II, a carefully choreographed installation by artist Robert J. Lang, featuring sixty origami koi fish swimming through space. Museum facilities manager Dave Jones and I used a wall-marked grid system – like a road map – prepared by curator of exhibitions Shannon Pueschner and Lang’s scaled design, to position and install puck-shaped mounting brackets, each one awaiting a folded fish. 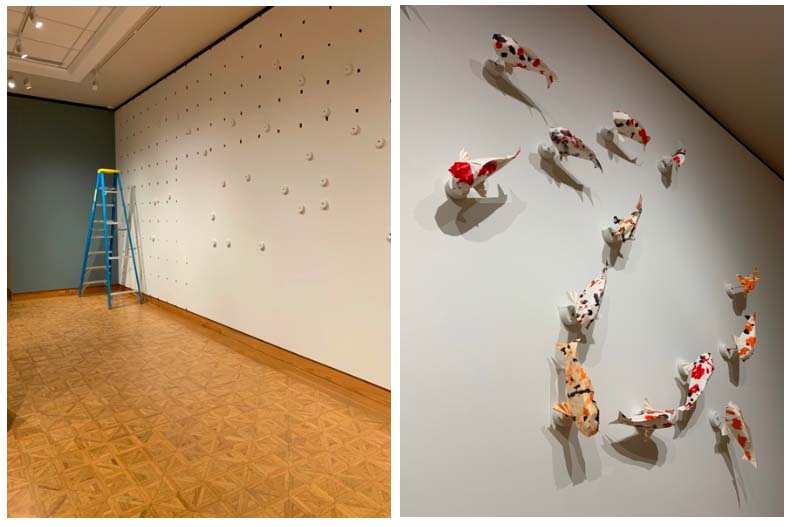 As much as I enjoyed my time assisting with the Above the Fold installation, another project in my office awaited transformation – audio into video – for the Museum’s audio tour app. Above the Fold curator Meher McArthur recorded audio tracks – one for each of the nine exhibition artists as well as an exhibition introduction –  and I added images to help illustrate the stories behind artworks on view. Check out the videos via the app or the Above the Fold: New Expressions in Origami video playlist on the Museum’s YouTube channel.

I’ll continue work on origami-related educational materials this week in preparation for Monday’s docent training, when fellow Museum educator Lisa Hoffman and I present information and share ideas, projects, and objects with volunteer docents who will guide hundreds of students and visitors through the galleries during the coming weeks.

Hands-on, interactive “tour props” enliven and illuminate artworks on view and help Museum staff and volunteers engage with students/visitors in the galleries. To demonstrate the range of folding techniques such as dampening, pleating, and modular origami featured in the exhibitions, students will take a closer look at origami models to observe the diverse approaches to transforming sheets of paper. 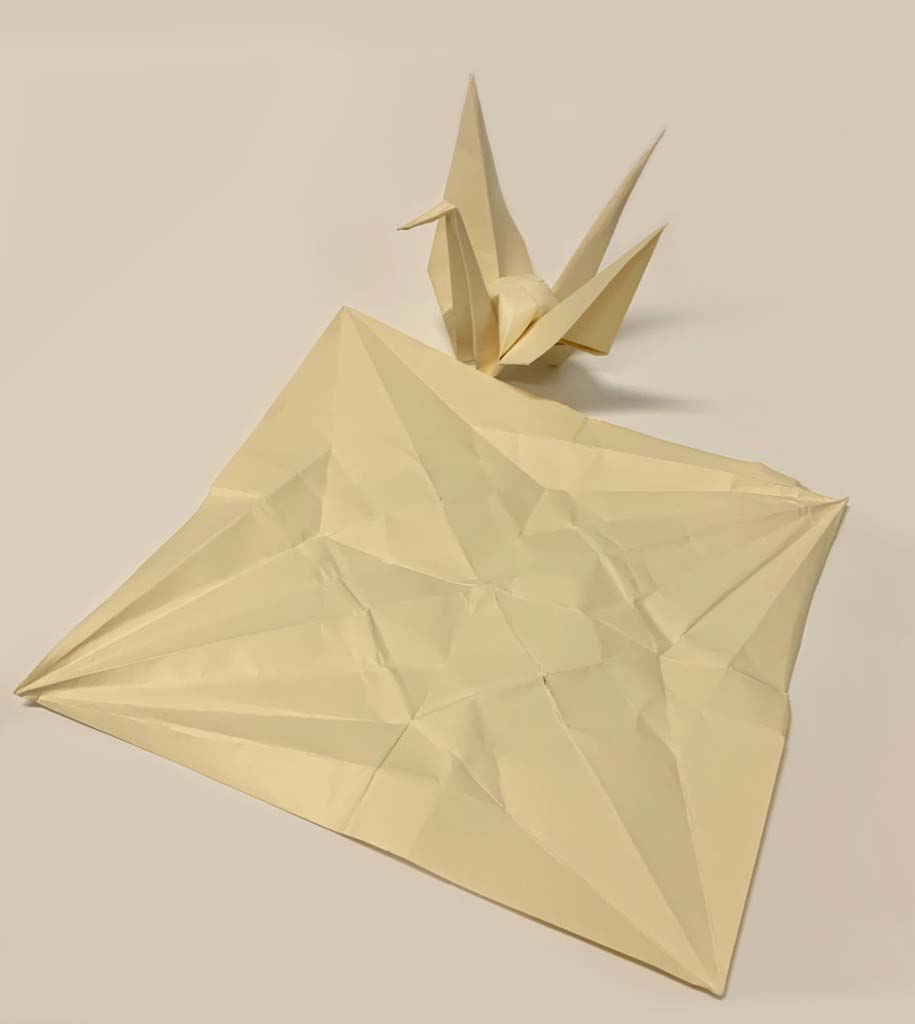 Origami crane and crease pattern, folded and unfolded by yours truly.

Where once there was a square, now there is a story. The humble beginnings of many origami masterpieces often start with a square sheet of paper, which in the hands of the artist becomes an object carrying the story of its design. One way these paper-folded stories can be interpreted is through the crease patterns of unfolded origami designs. 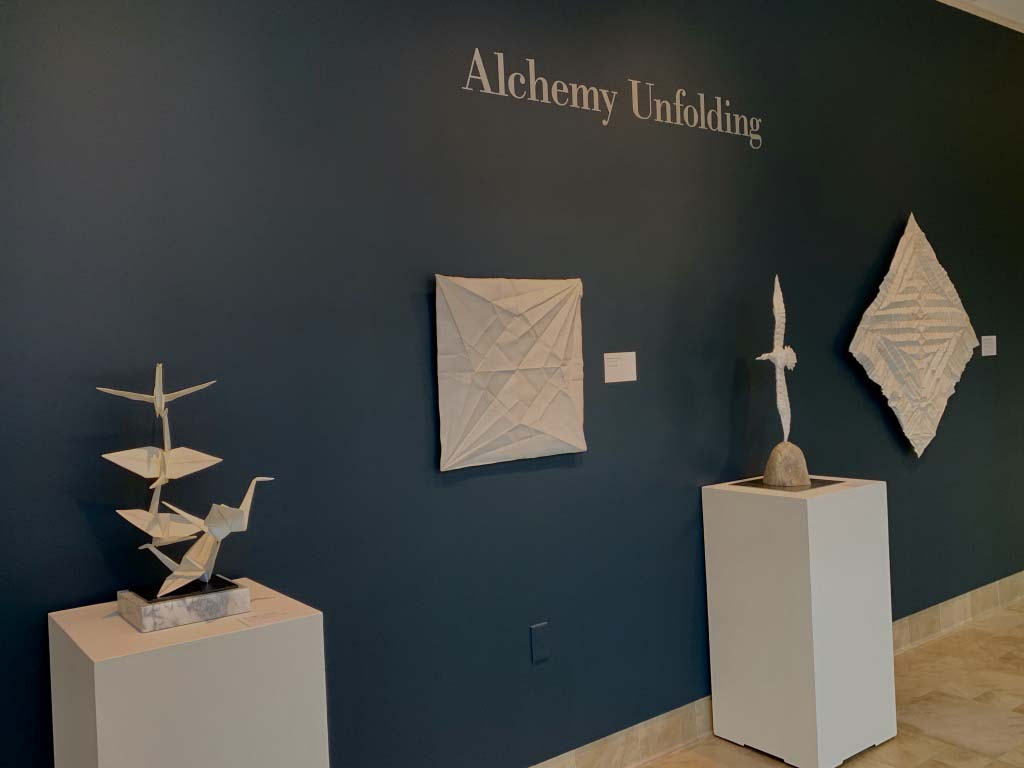 In Alchemy Unfolding, artist Kevin Box’s collaborations with Robert J. Lang and Michael G. LaFosse translate folded paper into cast steel sculptures of origami designs and their crease patterns, which prove to be as visually compelling as their three-dimensional counterparts.

I hope the inspired and seemingly infinite possibilities of origami design intrigues you and that you visit the Museum this winter, walking through the galleries and participating in public programs during artist residencies. The origami exhibitions remain on view through March 1. For more information about upcoming programs, see the Museum’s online events calendar, learn more about artists Jiangmei Wu and Robert Lang and their upcoming residencies here, and mark your calendars for many visits in the coming weeks and New Year, too.