By: Amalia Wojciechowski, curator of collections on December 22nd, 2021

Step into the American Woodblock Prints exhibition. What do you see first? Perhaps it’s the bright, kinetic lines of Jim Dine’s colorful bathrobe. Maybe it’s the geometric patchwork of a red triangle on a monolithic yellow hill in Carol Summers’ Arab Tent. Or do the finer lines and softer colors entice you? It could be the gently sloping pastel-colored hills of Katherine Van Dyke Harker’s Santa Barbara Rise, or the elegant precision of Thomas Willoughby Nason’s monochrome wood engraving, Mountain Stream.

Drawn in first by our visual instincts, what ultimately unfolds before our eyes is a microcosm of the story of American art, a brief history of the twentieth century in America contained on the wooden block. The exhibition’s artworks – at once precise, kinetic, gentle, and bold – capture the prevalent trends of American woodblock makers during a period spanning from 1910 to 1992.

Woodcut has deep roots in the history of art. It emerged as a technique in the fifteenth century and catapulted one of the first “superstars” of the art world – the Northern Renaissance artist Albrecht Dürer – to international attention. Wood engraving, a technique first developed by English artist Thomas Bewick in the eighteenth century, was used primarily for print media, such as newspapers and journals. Interest in these wood techniques was supplanted by interest in intaglio printmaking processes, such as engraving and etching, until a twentieth-century revival of artistic experimentation begun by the German Expressionist movement brought the medium back to the fore of avant-garde art.

This revival is tackled in its uniquely American context with gusto. The range of subjects articulates a new distinctly American iconography:

At the same time, artists engage with international art trends from Japonisme to Art Deco. 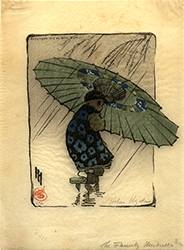 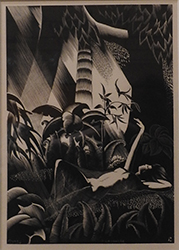 Come see what catches your eye.

P.S. Here’s an avian-themed connection: it was Thomas Bewick’s A History of British Birds (1797–1804) that first gained widespread popularity for its wood-engraving technique!